I finally got my Raspberry Pi yesterday, and wanted to ramble about it for a bit under the fold. 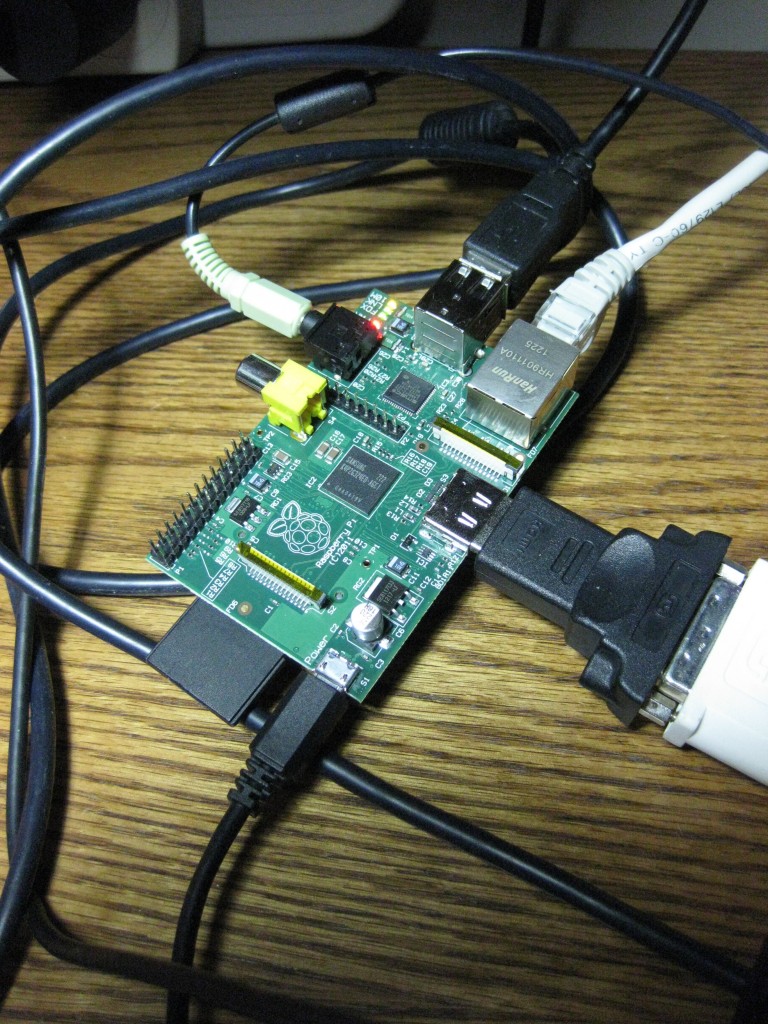 I’ve tried a couple system images (when you can swap out a SD card to swap OSes, how could you not play?), and am generally pretty impressed. There are already a whole bunch of OS images available, and I expect more soon. There are some noteworthy things about the three I’ve fiddled with in the first day.

ArchlinuxARM
It really is just Archlinux, like the rest of my computers run. It boots into 50MB of RAM and is more responsive than some old P4’s I’ve drafted for experiments recently. I’ve run into a little bit of funnyness about the project’s build habits (ex: mplayer in the repositories is linked against an older libx264 than is provided). I also hit an irritating bug from upstream that didn’t get my big computers (see these example threads where the forumites were just bitchy about it to the OP, and this post that explains the issue from a user perspective.)

Raspbmc
The Raspbmc installer is impressively automated, until it doesn’t work. Insert SD card into computer, run script, pick SD card from list, move SD cart into network-connected RPi… and it just kind of magics the rest, with a stream of pleasant status messages. Then it reboots and video out never comes back. Seems to be an OS image on the SD card, but it sure doesn’t look like it boots. My best guess is their install system makes some bad assumptions about SD card geometry, because I’m finding mostly success stories, mixed with lots of tales of models of card that don’t work on the ‘net. Hopefully I’ll get to play with it later.

Raspbian
The default installation is a full desktop environment, and it’s surprisingly snappy (probably because it does ARMv6 hardware floating point). The installer sort of splits the difference on techniques I’ve seen, images a full system, and runs a curses script on first boot to guide you through setup. The default desktop has shortcuts to system documentation and python interpreters (With sample code!) and Scratch, so it is clearly intended to encourage programming at whatever level one is ready for, and a bit of poking around reveals a full GCC tool-chain pre-installed. The amount of preinstalled software in this image is actually pretty remarkable – in addition to the selection of development tools, there is a well-featured modern *nix command-line userland, a fiarly complete LXDE environment, and a bunch of “light alternative” software, including three web browsers. This is probably the right starting point for most people.

Of the things haven’t messed with and would like to, the OpenELEC-derived XBMC system and the RISC OS image look like the most fun – I’ve never had OpenELEC actually work on anything in several tries, and never had hardware suitable for fiddling with Risc OS on hand before, so they should be interesting.

If you want a baby computer to play with, it’s as good as you can find anymore (stupid blobs…). If you want a media appliance that isn’t designed to lock you in to some vendor’s ecosystem, it’s well on it’s way to being competitive. One of the use cases I would most like a Raspberry Pi to be suitable for is as a cheap, small, silent storage server + media playback device, and I’m quite hopeful that I’ll be able to mold it into one – so it may be useful in addition to being fun.