Shared items and notes from my feeds and browsing. Subscribe as feed.

Article note: Oh boy, distributing critical updates through a side-channel (Microsoft Store) that many enterprise (and some personal) customers have disabled instead of the update channel (Windows Update) just for this kind of thing. There must be a reason, but wtf?

Microsoft has published unscheduled fixes for two critical vulnerabilities that make it possible for attackers to execute malicious code on computers running any version of Windows 10.

Unlike the vast majority of Windows patches, the ones released on Tuesday were delivered through the Microsoft Store. The normal channel for operating System security fixes is Windows Update. Advisories here and here said users need not take any action to automatically receive and install the fixes.

CDC says U.S. has ‘way too much virus’ to control pandemic as cases surge across country

Welcome to the "Failed State" era of the U.S.

Oh, nice, someone made an 32u4 Arduino sketch for a Microwriter/Qinkey chorder. I've always sort of wanted to try that chord-set (and always feared it will ruin my feeble attempts to keep BAT-style chords in my fingers). Might have to try, my chorder is a 32u4 anyway.

Article note: Huh, just staring at 670nm LEDs for a few minutes a day noticeably improved color perception and low-light sensitivity in the 40yo+ participants. Neat!
Comments
Posted in News | Leave a comment

Article note: I mean, I'm not sad see to see those clusters of assholes get discouraged, and at least they applied it in a nominally cross-spectrum way. But still, all communities are defined by an in-group/out-group antagonism, so now we enter the era of infinite, slippery arguments about what counts as "hate speech" and what counts as "community norms." Ed: Oh fuck, I read the rules, it's a little dumber than I expected. "Marginalized or vulnerable groups include, but are not limited to, groups based on their actual and perceived race, color, religion, national origin, ethnicity, immigration status, gender, gender identity, sexual orientation, pregnancy, or disability. These include victims of a major violent event and their families. ... While the rule on hate protects such groups, it does not protect all groups or all forms of identity. For example, the rule does not protect groups of people who are in the majority or who promote such attacks of hate." Read that rule carefully and note that it would, for example, not apply against minority apartheid activists. "Punching Up" has always been and continues to be a synonym for "Hurting the right people" for a different audience.

Reddit has banned about 2,000 forums, including the pro-Trump section, The_Donald.

Reddit announced on Monday it was banning a large number of subreddits, most of which it says are inactive, as part of a crackdown against hate speech, The New York Times reports. Among them was The_Donald, the board for supporters of President Trump that had almost 800,000 users. Trump has in the past tweeted memes that were first posted there.

"Reddit is a place for community and belonging, not for attacking people," Reddit CEO Steve Huffman said, per the Times. "The_Donald has been in violation of that."

A post to Reddit's announcement subreddit laid out the site's new content policy, saying that "communities and users that promote hate based on identity or vulnerability will be banned." As far as The_Donald goes, the announcement said it has "consistently hosted and upvoted more rule-breaking content than average," as well as "antagonized us and other communities," and "its mods have refused to meet our most basic expectations."

Another popular community to be banned was the group for listeners of the leftist podcast Chapo Trap House. Users who visit the page are now met with a message saying the group was "banned for violating Reddit's rule against promoting hate."

Reddit's former CEO, Ellen Pao, previously said the site should ban the pro-Trump forum. "You should have shut down The_Donald instead of amplifying it and its hate, racism, and violence," Pao wrote earlier this month in a tweet directed at Huffman. "So much of what is happening now lies at your feet."

Article note: The activist left's (which has, essentially, devolved into a continuous replay of the "Judean peoples front vs. People's Front Of Judea" Monty Python sketch while the actually-in-power capital class rides off with complete victory) tendency to respond to having to no real power by increasingly exercising petty power for media purges (more mud-mask == blackface purges in the feed today, lol), nomenclature battles, and personal harassment, is undermining their ability to ever attain any real power with their bullshit. I don't much care either way about this and the dozen other recent "Master/Slave can only be understood the light of U.S. History" linguistic manipulation stories, but I'd like to live in a country with a functioning healthcare system and infrastructure, and that will require some consolidated power on the left. Social movements live and die on their ability to demonstrate power and restraint, and this shit is demonstrating the lack of both, at a time when all you need to do to be the responsible adult is not be an _obvious_ petty jackass. 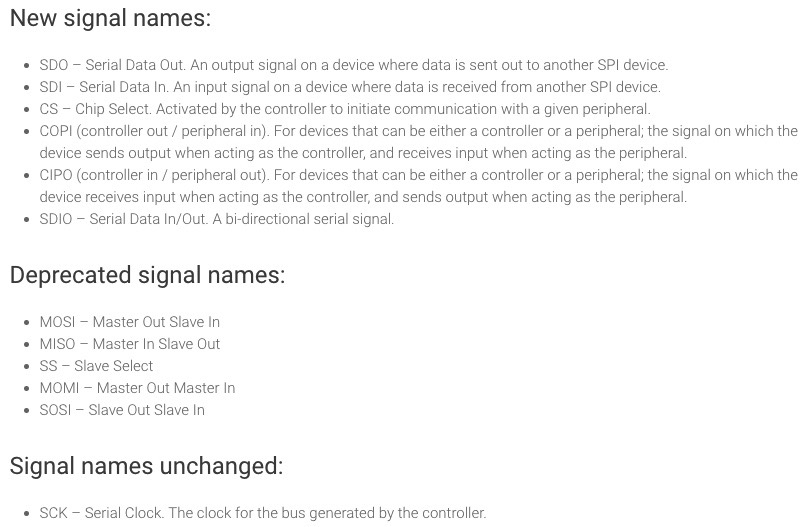 A Resolution to Redefine SPI Signal Names: We, the undersigned, encourage educators, engineers, designers, and community members to discontinue the use of the terms MOSI/MISO/SS and in their place use SDO/SDI/CS.

Article note: Fuckin' cool. I love "Just because" hacks on retro hardware, I love watching owner-hostile security schemes fall, here we are in the intersection.

A demo from CTurt shows an SNES emulator running on a PS2 from a burned DVD-R.

Nearly 20 years after its initial release, a hacker has found a way to run homebrew software on an unmodified PlayStation 2 using nothing but a carefully burned DVD-ROM.

Previous efforts to hack the PS2 relied on internal modifications, external hardware (like pre-hacked memory cards and hard drives), or errors found only on very specific models of the system. The newly discovered FreeDVDBoot differs from this previous work by exploiting an error in the console's DVD video player to create a fully software-based method for running arbitrary code on the system.

Security researcher CTurt laid out the FreeDVDBoot discovery and method in detail in a blog post this weekend. By decrypting and analyzing the code used for the PS2's DVD player, CTurt found a function that expects a 16-bit string from a properly formatted DVD but will actually easily accept over 1.5 megabytes from a malicious source.

Article note: Good! Once again, Roberts demonstrates he actually believes in the functioning of the legal system, and everyone to the right of him demonstrates they are craven ideologues.

A Louisiana abortion law has just been ruled unconstitutional by the Supreme Court.

In a 5-4 decision on Monday, the court struck down a restrictive Louisiana law requiring doctors who perform abortions to have "active admitting privileges" at a hospital within 30 miles, NBC News reports. The law was passed in 2014, and the court noted it was similar to a Texas law it previously struck down in 2016. The restrictions under Louisiana's law could have resulted in the state having just one abortion clinic, The New York Times notes.

Chief Justice John Roberts joined the liberal majority, saying that although he joined the dissent for the case of the Texas law, "the Louisiana law imposes a burden on access to abortion just as severe as that imposed by the Texas law, for the same reasons," per The Washington Post. "Therefore Louisiana's law cannot stand under our precedents."

“Apps are the ad blocking workaround the industry found after browsers started marking it harder.” https://t.co/FRYcgL9GkX

“Apps are the ad blocking workaround the industry found after browsers started marking it harder.” https://t.co/FRYcgL9GkX