Article note: They really are. The grey scale M that shows up as a notification icon on android, replacing the envelope icon, is especially shit.
Comments
Posted in News | Leave a comment

Article note: Didn't they fire everyone who wouldn't relocate to SF a couple years ago? I have mixed opinions about the location-based compensation issue. Of course top talent that can do their job remotely deserves the same pay regardless of where they happen to be working remotely from, and it's better for employees to have that market and mobility... but at the same time for work that dose require physical presence, you'd have to offer me pay with _extra digits_ to even consider relocating to one of the sprawling coastal metropolitan clusterfucks. Also, forcing hot-desking on people who _are_ primarily working in-person seems like the same class of trend as "open offices" - absolutely morale-and-productivity crushing misery for all because it's cheap and flexible for the employer.
Comments
Posted in News | Leave a comment

Article note: Ooh, they're making a second generation in that formfactor.

Choice of LineageOS and Ubuntu Touch as well as Android

UK smartphone developer F(x)tec has rolled out the second generation of its sliding keyboard phones, the F(x)tec Pro1 X.…

Type in the exact number of machines to proceed

Article note: I think the general idea that feedback-required, thoughtfulness-inducing friction is desirable much more often than generations of interface makers have been thinking. From "Eternal September" to Twitter's experiments with "Did you actually read this thing you're about to retweet" prompts, there is real evidence that UX has been optimizing for dumb things.
Comments
Posted in News | Leave a comment

Article note: Man, I'd really like a little obscene-battery-life 8" class machine like this (for writing and probably also as a terminal) that was well executed and cheap enough not to be precious about, but the E-ink never quite makes it, and bespoke small-market devices are always prohibitively expensive. I've seen it done with hacked-up kindles a couple times and _those_ seem better than this. 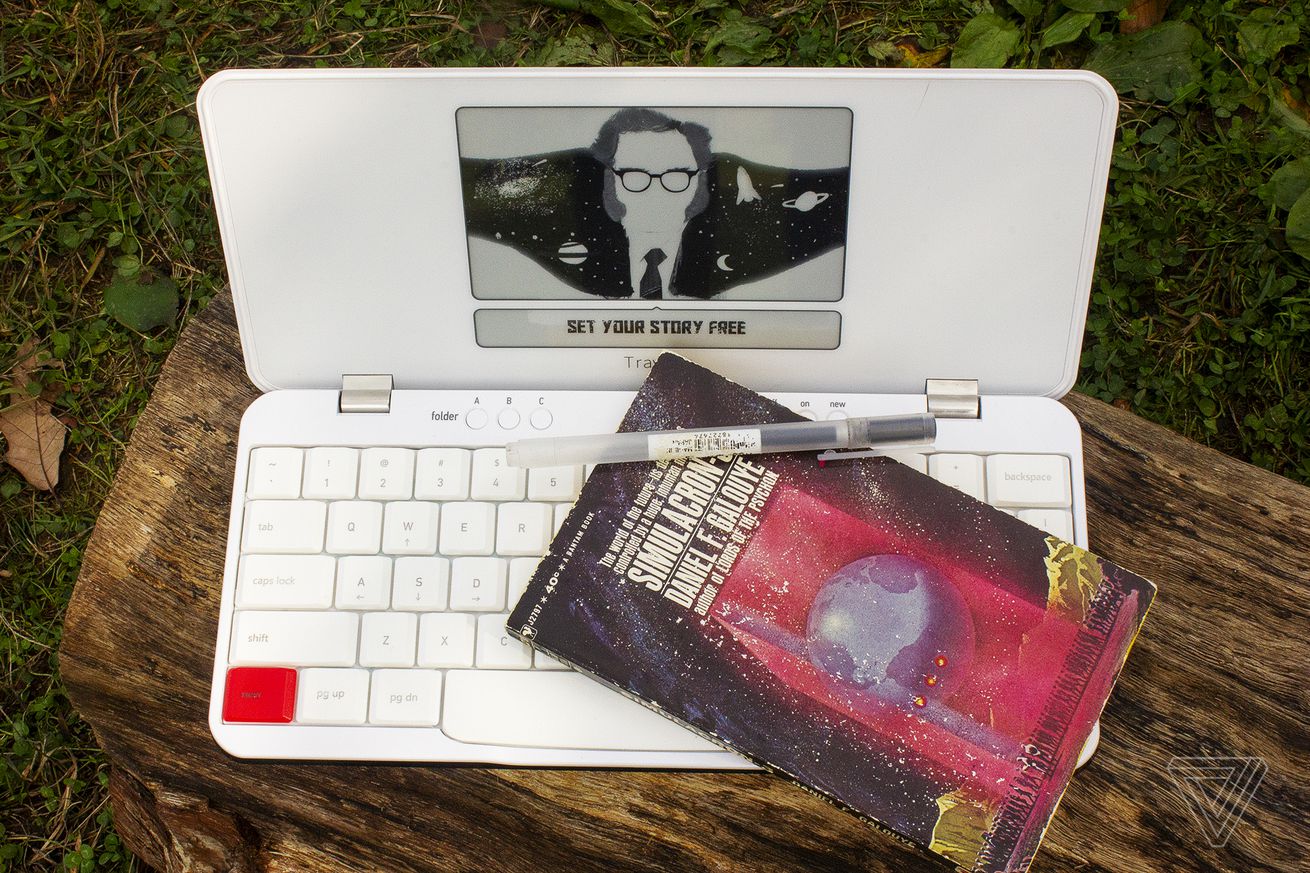 Gadget crowdfunding is great for fulfilling niche demands. Most people, for instance, would never buy a $599 Wi-Fi-enabled typewriter. But in 2016, a Detroit-based startup called Astrohaus proved that not only could such a thing exist, but it could be a delightful and strangely satisfying device. Now, Astrohaus is trying to capture the same experience in a smaller and more convenient package — but unfortunately, its hardware can’t back that promise up.

Astrohaus is the creator of the Freewrite, a chunky word processor with a modern mechanical keyboard, wireless syncing options, and an E Ink screen. Today, the company starts shipping the Freewrite Traveler, a lighter laptop-like alternative. The Traveler is temporarily discounted to $429,...

Article note: General semiconductor industry consolidation. Keeping up with Intel. Buying stuff to compete in the current AI hype-cycle. There are lots of reasonable choices for why they went for this. Maybe it'll be a good thing, AMD is pretty good about (open) tools lately, so maybe we'll see some tool chain improvement.

After a couple of weeks of rumor, as well as a couple of years of hearsay, AMD has gone feet first into a full acquisition of FPGA manufacturer Xilinx. The deal involves an all-stock transaction, leveraging AMD’s sizeable share price in order to enable an equivalent $143 per Xilinx share – current AMD stockholders will still own 74% of the combined company, while Xilinx stockholders will own 26%. The combined $135 billion entity will total 13000 engineers, and expand AMD’s total addressable market to $110 Billion. It is believed that the key reasons for the acquisition lie in Xilinx’s adaptive computing solutions for the data center market.

“Our acquisition of Xilinx marks the next leg in our journey to establish AMD as the industry’s high performance computing leader and partner of choice for the largest and most important technology companies in the world. This is truly a compelling combination that will create significant value for all stakeholders, including AMD and Xilinx shareholders who will benefit from the future growth and upside potential of the combined company. The Xilinx team is one of the strongest in the industry and we are thrilled to welcome them to the AMD family. By combining our world-class engineering teams and deep domain expertise, we will create an industry leader with the vision, talent and scale to define the future of high performance computing.”

“We are excited to join the AMD family. Our shared cultures of innovation, excellence and collaboration make this an ideal combination. Together, we will lead the new era of high performance and adaptive computing. Our leading FPGAs, Adaptive SoCs, accelerator and SmartNIC solutions enable innovation from the cloud, to the edge and end devices. We empower our customers to deploy differentiated platforms to market faster, and with optimal efficiency and performance. Joining together with AMD will help accelerate growth in our data center business and enable us to pursue a broader customer base across more markets.”

As part of the acquisition, Victor Peng will join AMD as president responsible for the Xilinx business, and at least two Xilinx directors will join the AMD Board of Directors upon closing.

Part of the enablement of the acquisition is AMD leveraging its market capitalization of ~$100 billion, and a lot of the industry will draw parallels of Intel’s acquisition of FPGA-manufacturer Altera in December 2015 for $16.7 billion. The high-performance FPGA markets, as well as SmartNICs, adaptive SoCs, and other controllable logic, reside naturally in the data center markets more than most other markets. With AMD’s recent growth in the enterprise space with its Zen-based EPYC processor lines, a natural evolution one might conclude would be synergizing high-performance compute with adaptable logic under one roof, which is precisely the conclusion that Intel also came to several years ago. AMD reported last quarter that it had broken above the 10% market share in Enterprise with its EPYC product lines, and today’s earnings call is also expected to see growth. AMD is already reporting revenue up +56% year on year company-wide, with +116% in the Enterprise, Embedded, and Semi-Custom markets.

The press release states that AMD expects to save $300m in synergistic operational efficiencies within 18 months of closing, due to streamlining shared infrastructure. The deal has been unanimously approved by both sets of directors, and is subject to approval of both sets of shareholders. The transaction is expected to close by the end of Calendar Year 2021.

AMD shares are currently down 5% before the market opens. A conference call will be held at 8am ET to discuss AMD’s Third Quarter Financial results and acquisition plans.

AMD's key product lines includes its Zen based processor lines such as Ryzen and EPYC, its Graphics division for Radeon and Radeon Instinct, and its semi-custom and embedded division which has been developing the latest generation of console processors for both Sony and Microsoft.

Xilinx recently entered the market with its Versal Alveo Adaptive SoCs, built as combination programmable logic plus hardened compute logic and specialized co-processors and accelerators. Its FPGA families include Spartan, Zynq, Artix, Kintex, Virtex, and Virtex Ultrascale, used in a wide variety of commercial, embedded, and enterprise markets, including the hardware used to design processors of the future.

I Think Bluetooth Is Finally OK

Article note: I still have had 0 Bluetooth devices that haven't at some point done something insane, made difficult to diagnose by lack of human interface. I tolerate BT headphones around the house because non-Bluetooth RF headphones are basically a dead market, but that's about it. Plus, wandering around in public with BT devices in "HEY EVERYONE LOOK AT MY UNIQUE IDENTIFIER" mode all the time seems like inviting abuse by the usual rogues' gallery of public and private interests.
Comments
Posted in News | Leave a comment