AMD Is in Advanced Talks to Buy Xilinx

Article note: I guess Intel bought Altera so AMD feels the need to own a top-tier FPGA vendor as well? Xilinx did make a bunch of HyperTransport-compatible FPGA modules back when that was a thing, so perhaps they have an established working relationship they plan to exploit?
Comments
Posted in News | Leave a comment

Article note: AMD is still killin' it. Those look impressive and competitively priced, and are months ahead of Intel's planned next gen desktop parts.

Dr. Lisa Su, the CEO of AMD, has today announced the company’s next generation mainstream Ryzen processor. The new family, known as the Ryzen 5000 series, includes four parts and supports up to sixteen cores. The key element of the new product is the core design, with AMD’s latest Zen 3 microarchitecture, promising a 19% raw increase in performance-per-clock, well above recent generational improvements. The new processors are socket-compatible with existing 500-series motherboards, and will be available at retail from November 5th. AMD is putting a clear marker in the sand, calling one of its halo products as ‘The World’s Best Gaming CPU’.  We have details.

IBM to split into two companies by end of 2021

Article note: Whut. All the "younger" big old players in computing have had ignominious deaths (Sun, SGI, etc.) as they crumbled. HP has disassociated into divisions that make _some_ sense. Etc. But here goes IBM, the biggest and oldest of the surviving computing institutions, on another decade of "No apparent direction." They mismanaged their consumer-facing divisions (everything about small systems...) to death in the 90s and 2000s and divested, and now appear to be flailing the same way at everything. What I can't tell from the announcement is where their technically interesting parts (POWER, surviving mainframe industries, Fabs, etc.) will land. 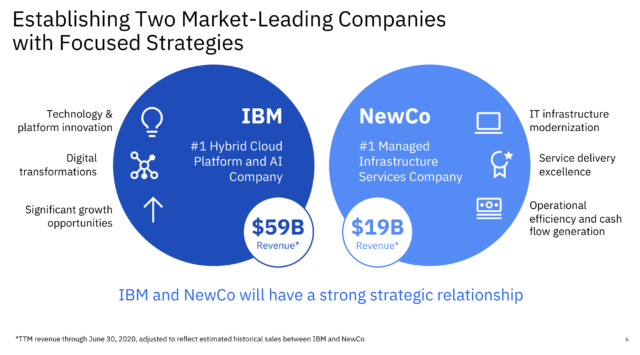 A big blue Big Blue chart showing how this is going to work. (credit: IBM)

IBM announced this morning that the company would be spinning off some of its lower-margin lines of business into a new company and focusing on higher-margin cloud services. During an investor call, CEO Arvind Krishna acknowledged that the move was a "significant shift" in how IBM will work, but he positioned it as the latest in a decades-long series of strategic divestments.

"We divested networking back in the '90s, we divested PCs back in the 2000s, we divested semiconductors about five years ago because all of them didn’t necessarily play into the integrated value proposition," he said. Krishna became CEO in April 2020, replacing former CEO Ginni Rometty (who is now IBM's executive chairman), but the spin-off is the capstone of a multi-year effort to apply some kind of focus to the company's sprawling business model.

Cloudy with a chance of hitting the quarterly guidance

The new spin-off doesn't have a formal name yet and is referred to as "NewCo" in IBM's marketing and investor relations material. Under the spin-off plan, the press release claims IBM "will focus on its open hybrid cloud platform, which represents a $1 trillion market opportunity," while NewCo "will immediately be the world’s leading managed infrastructure services provider." (This is because NewCo will start life owning the entirety of IBM Global Technology Services' existing managed infrastructure clients, which means about 4,600 accounts, including about 75 percent of the Fortune 100.)