A not long ago there was some noise in places I follow about Zynq FPGA boards surplussed from their role as controllers in retired cryptocurrency mining rigs, for way less than the price of even the bare FPGA SoC. I impulse bought one EBAZ4205 from “College Shop Store” on Aliexpress for $19.08 shipped to try them out, since it seems to to be the most common and documented flavor, and it showed up yesterday. Short version: they look awesome for the price.

I got one of the free-with-YouTube-Premium Stadia Premiere kit + Pro trials just out of curiosity (since I’m waiting to cancel until Play Music actually stops working, and why say no to $100 of free toys), and after playing for it for an evening, while I’m very technically impressed … I’m completely baffled as to why anyone would pay for this thing, or especially “buy” individual games on it.

It is fast and surprisingly responsive, and the (insane) distributed “phone or computer + controller + Chomecast all talk to the internet and also to Bluetooth and manage to stay in sync” wizardry is an amazing technical achievement, as is the low-latency, reasonably low-artifact streaming.

…but the subscription/rental library is tiny, expensive, and non-portable. It sucks a massive amount of bandwidth (it seemed to be holding at about 20-25Mbit/s down during my AAA test). The fact that I need a minimum of three independent devices (since you can’t do most of the configuration or library management with the controller + Chromecast) to play on the TV is awkward, and the layers of account management and device syncing are pretty wonky for a single user, I can’t imagine dealing with it in a multi-user household.

I played a little bit of Celeste (as an input lag test; it was not half bad, though playing it on a controller is not my preference), a little bit of Hitman (To see how heavy duty graphical games would do), and a little The Gardens Between (hadn’t played it, in my Pro trial, looked neat) – and they worked, but nothing about the experience was particularly compelling.

The whole free-kit-for-Premium-subscribers thing feels like a desperate attempt to dump their hardware stock to build enough user base to recoup the back-end costs for another doomed Google product that will die as soon as the current back end ages out and the workforce moves on to career-advancing shiny new things – after Buzz, Reader, Plus, Play Music, the steady churn of ever-worse chat tools, and half a dozen other products that were useful enough to take all the air out of a market before being unceremoniously dumped Google has lost all credibility for paid rentals or ecosystem investment.

All the freebie premiere kits are going to be Goodwill gold in a couple years though – the controllers are decent (Not $70 decent, but decent) and seem to work as normal HID devices, and there are two nice USB power bricks with cables in there.

I ran into a delightful irony trying to help a student get set up for the embedded systems lab I’m running this semester: Neither Keil MDK ARM (a first-class ARM development environment) nor the Stellaris ICDI Drivers (TI’s programming/debug interface … Continue reading →

I’ve been idly looking for one of the mid-90s ThinkPads known to have perfect OpenStep/Rhapsody support for years as a fun collector piece, but been unwilling to pay eBay prices. The other week I scored a pristine IBM ThinkPad 560E for $20 in a Shopgoodwill auction, below is notes on getting it up and running, plus some relevant history and plans.

This post is a retro post on a retro topic – a repair I did in 2017 on a monitor made in 1991. I got a question about (probably) the same problem in another venue and realized I never put it online. I managed to dig up my pictures and notes, so there is useful information to be shared.

The end of my (2016) post about Recapping my Macintosh LC I discovered that my matching Apple 12″ Macintosh RGB Monitor ( M1296 ) was going pear-shaped, and speculated that I’d need to recap it.

I have a machine with SSH exposed on one high-numbered nonstandard port forwarded through a NAT. A few days ago I noticed some log noise about failed SSH logins and turned on fail2ban with sane defaults. It banned almost 300 … Continue reading →

I had my dear old Macintosh SE out for a health check as I slowly extract my vintage computer collection from the (unconditioned) place I’ve been keeping it at my parents house to the basement of the place I’m renting. It had a couple interesting findings that seem worth putting online, including another floppy drive rebuild and a slightly elaborate fan replacement.

Even though I haven’t done any work in that area in years, I got pulled into the Supercomputing conference again this year.  Can’t complain, it’s always fun.  UK’s combined booth looked good this year 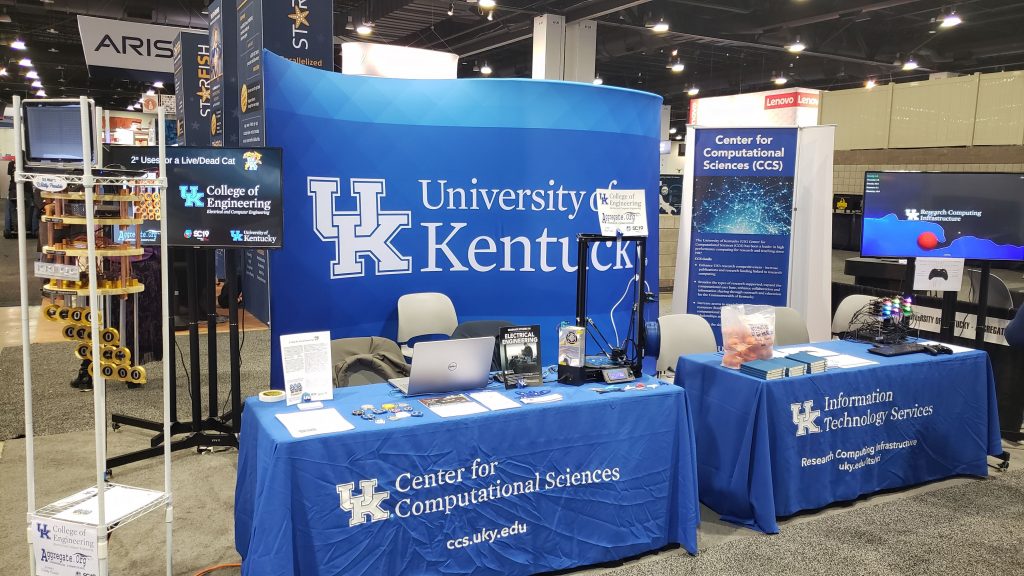 Far corner is a little updated TinyTitan style Raspberry Pi cluster with a interactive CFD demo running on it that the CCS folks have been playing with, that thing in the leading corner is a cute flip-dot “quantum computer” model we built as a front-end for a 16-bit instance of Hank’s parallel bit-pattern computing system that can do quantum algorithms efficiently on a conventional platform – set in the corner of the booth like 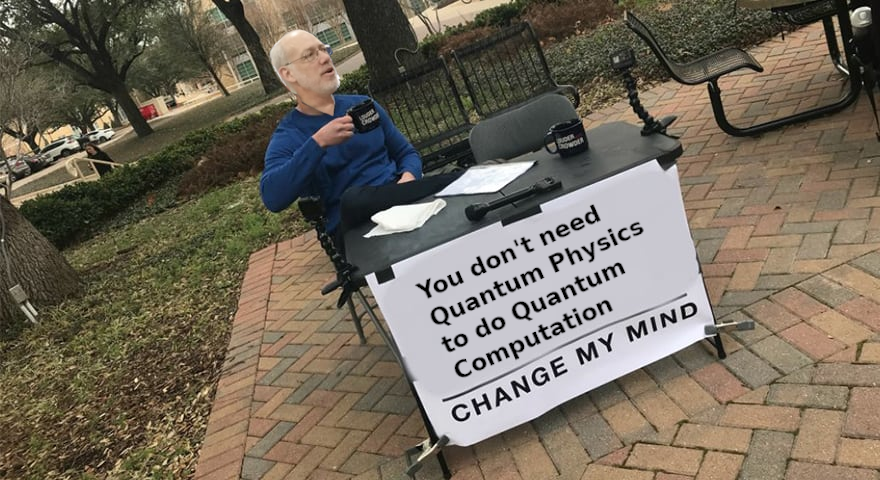 He did surprisingly well with this approach.

The server that hosts this page was updated from Debian Jessie (8) through Stretch (9) and onto Buster (10) over the course of a few hours today. It involved surprisingly little suffering and should not affect functionality, please let me know if you find anything left in a broken state.

I didn’t realize how long it had been since I did any manual maintenance here, apt unattended upgrades, certbot, and a few scripts for user-installed package upgrades and backup had done such a good job maintaining things just visibly enough to know it was being taken care of that I’d let it get past-due. Most of my other individually-installed boxes are Arch rolling-release machines that require a few minutes of attention every month or two, so they don’t have the periodic major breaking maintenance issue to the same degree.

Now I can let it take care of itself again until 2022 or thereabouts.
A few notes that may be useful to others under the fold.
END_OF_DOCUMENT_TOKEN_TO_BE_REPLACED

That MSEE that I was going to finish in 2011, 2013, and 2015? I blew a couple months in the last year to get all the ducks in a row and actually collected it before the credits expired.  Huge thanks to Dr. Aaron Cramer, the current DGS for UK’s ECE department who went to great lengths to deal with the bureaucratic issues my lackadaisical attitude about credentials created.

The LARs design is fundamentally interesting, but the compilation work the MS is based on is not my favorite work I’ve done.  The core initial assumption (that LAR allocation and register allocation were more-or-less the same problem) turned out to be very, very wrong, and the implications of that wrong assumption turned out to be far reaching, turning a 2-year MS into a decade-long ramble. It’s not as depressing as I thought it would be when I tried to finish in 2015 (and was blocked by bureaucratic fuckery) because I did eventually determine that LARs aren’t subject to the “you can’t statically schedule around dynamic memory behavior” thing that doomed VLIWs, and in fact LAR allocation can be done greedily in ways that register allocation cannot.

The thesis is more or less assembled from three false starts plus the final effort; my initial research start with the wrong assumptions, my “oh, we’re wrong, but it’s OK” pass, and my “oh shit, we’re screwed, this won’t work and there his historical evidence to show it” pass, plus the final “I’ve figured out how this is tractable and possibly even desirable, but I’m out of time and fucks, so here’s the rough solution” pass.

I formatted the thesis in LaTeX (of course), using the ukthesis.cls class I found on the UK Math site that Eric Stokes, a former student, made a decade and change ago since UK is too chickenshit to provide a valid one of their own.  I did have to hack it a little bit, turn off some features, tweak the front matter, etc. to make it acceptable to the graduate school, and update a few things (eg. adjusted to use biber for references).  There are a few things in the document that should be in the class, and things in the class that should be in the document, but the easy-to-fix stuff is fixed.  Minimal example pulled from the accepted version with makefile and such here to save future students the extra annoyance.

The presentation is in beamer using the Owl theme, which was a delightful recent discovery – someone has made a beamer color scheme with a dark background and colors that actually look good on a projector. I (much to one of my committee member’s disappointment) went with the bullets-to-keep-me-on-track-while-I-talk style slides instead of my usual “amusing semi-relevant pictures to key off of” scheme.

It’s nice to be done and only have one, significantly less depressing, long-term academic project people are grumpy about my progress on.