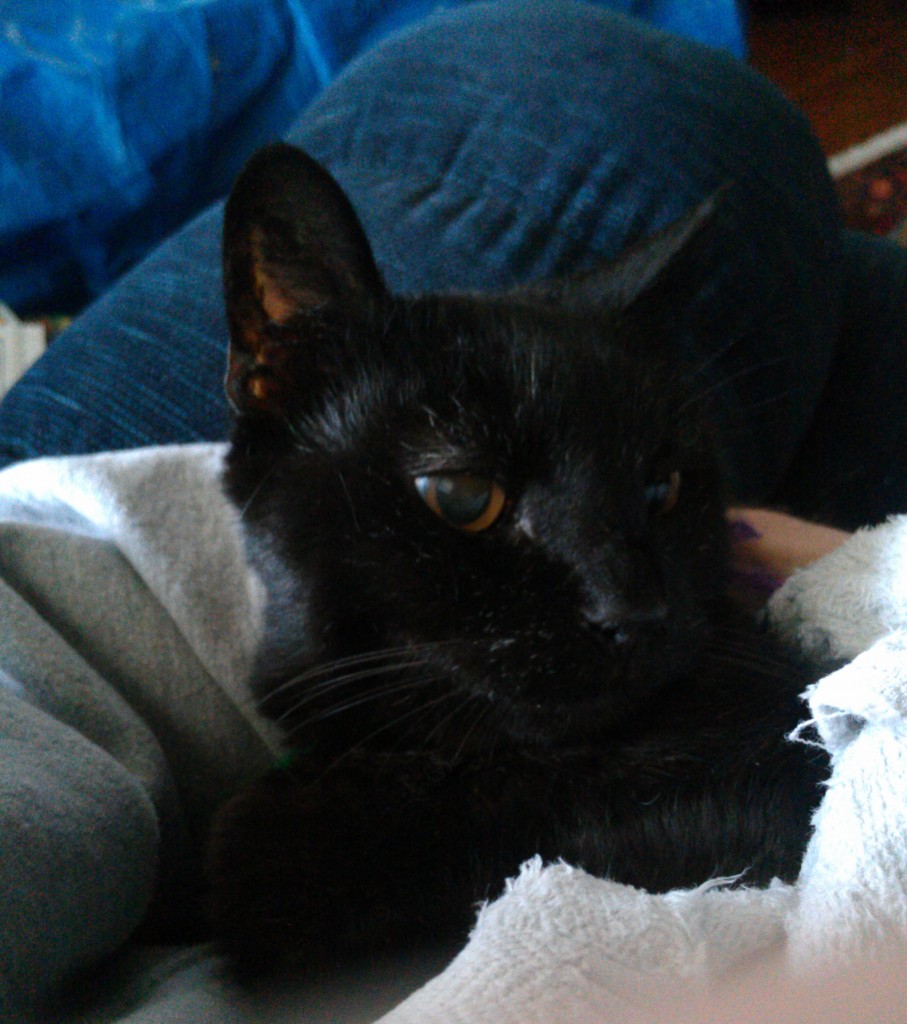 We had to put down my parent’s ~19 year old cat, Pharoah today. We got him as an young adult, and have had him for about 16 years, so he has been a presence for more than half my life.

When we got him, he had been returned to the pound for unspecified reasons. We picked him because of his personality – he was remarkably docile, and very attentive to humans, traits that, as we hoped, he imparted to a number of less-social housemates over the years. Shortly after we got him, we noticed he looked a little odd and didn’t clean himself. It then became clear that, as they started to grow back, the intermediate owners had clipped his whiskers short and, because it came off when we bathed him, dyed his gray and brown undercoats black. Even after such a terrible second owner, he had abandonment issues for his entire life. He was an indoor/outdoor cat for most of his life, and made friends with all the neighbors. Whenever someone was upset on their porch (which, in a neighborhood full of college students, happens rather regularly) he would go try to console them. He somehow communicated to a family across the street that he wanted a water bowl with ice in the summer, and got them to oblige. Neighbors worried when they didn’t see him for a couple days.

In another personality-establishing story, the first time he was allowed outside after we got him, he climbed a tree and couldn’t figure out how to get down. We set up an extension ladder to help him down, but he decided to jump instead and broke his toe. It was December, so the vet wrapped his leg in green, red, and white bandages, and told us he would remove it in a matter of days. Three weeks and a drive up to Wisconsin with us to visit family later, the cast had to be cut off. He always liked decorations: Large collars. Ribbons. Tags. Bells. He would be visibly distressed for hours when he lost one, and would sometimes bring things that fell off back to be reattached. Hurt feelings could be fixed with another bit of ribbon tied to his collar. As he aged, the wear from his preference for elaborate collars gave him a bald spot on the back of his neck, but nothing could be done because we couldn’t take them away from him.

Near the end, his never-terribly-sharp senses had dulled to the point where he didn’t always know where he was, and he had lost partial control of his hindquarters, but he hung on, enjoyed himself, and made the resultant messes until it got so bad he was unable to perform the most basic acts of catdom, as is the prerogative of old pets.

He was the most human-centered cat I’ve ever encountered, and will be missed dearly.

This entry was posted in Navel Gazing and tagged cats. Bookmark the permalink.