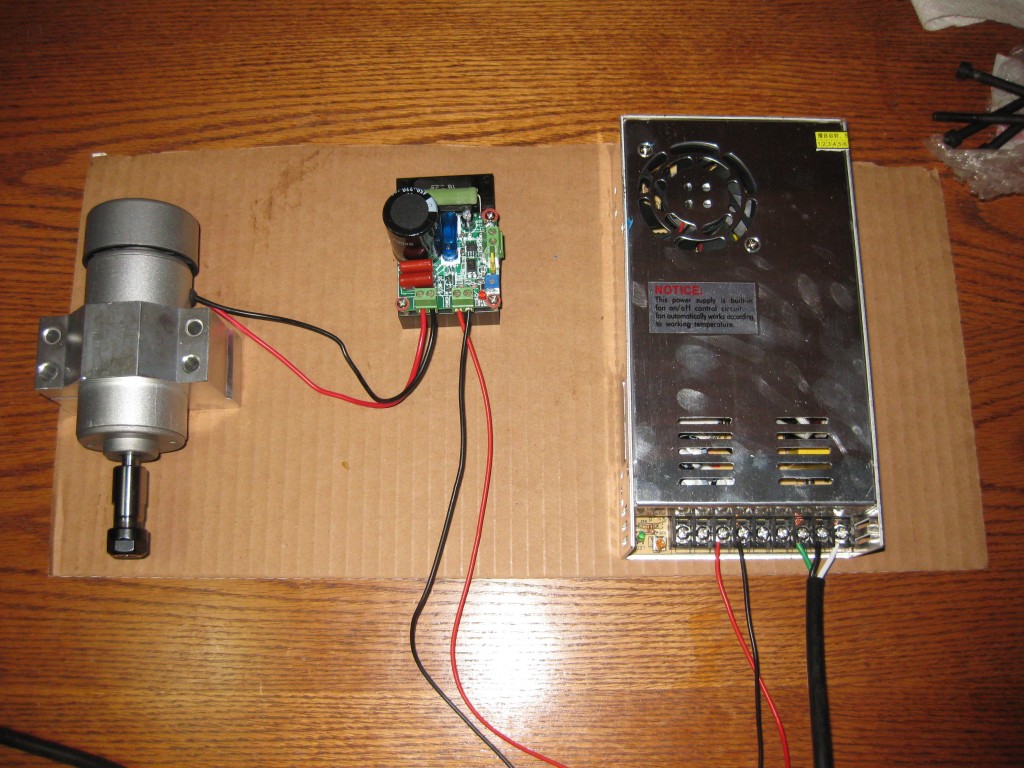 This was my first AliExpress transaction, and I am pleased with both AliExpress’ ordering and payment system, and really pleased with TOISAD Engraving Machine Speciality [sic] Store that I bought the spindle kit from. I’ve been wanting a paypal-free source of Chinese industrial products for my hobbies, and I’m pretty sure AliExpress is now my preferred option.

I ended up paying $115.62 for the part and $53.52 for shipping, which is excellent as compared against the usual cost of the components – big motors and power supplies are not cheap. 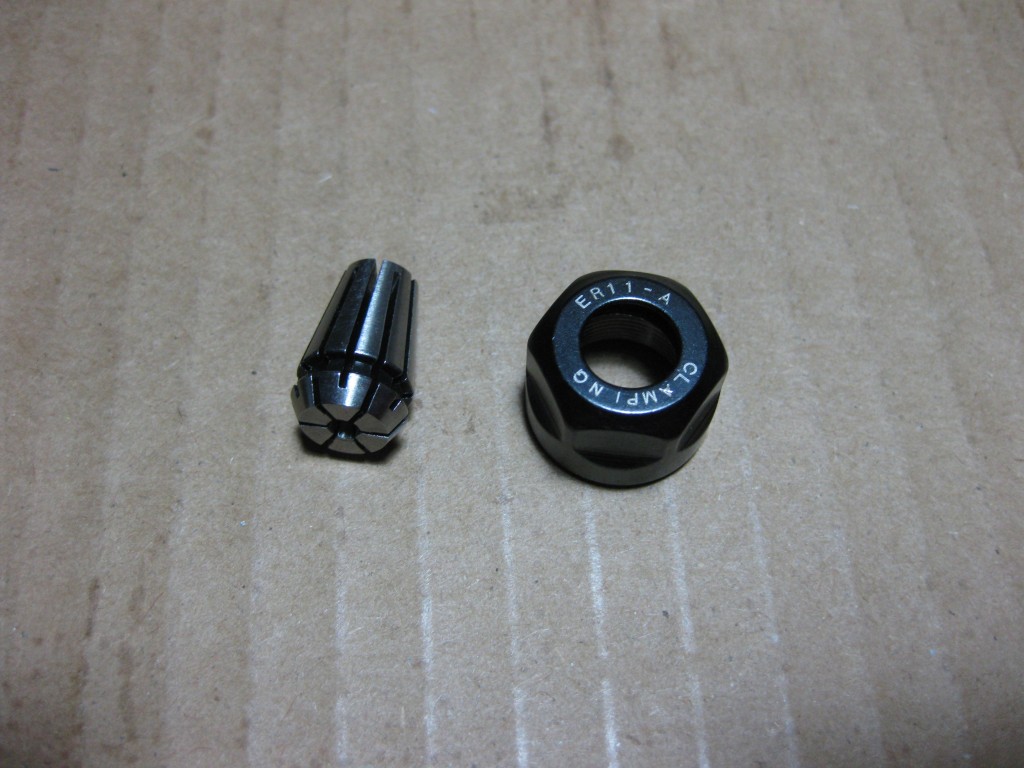 It comes with a 1/8″ ER-11 collet installed in the nut, which was in the pictures but not expressly listed. I would still have been perfectly happy had there not been one, but it is very nice that it is included, since that is the only size I need at the moment. It even feels like a true 1/8 – ER-11 is designed for around a 0.5mm range in the grabbing diameter, so it can be hard to tell the 3mm/ 1/8″ /3.5mm collets apart, and it doesn’t appear to be engraved. I’ve seen some question as to whether the collets are actually exchangeable on these cheap spindles – mine pops out of the eccentric ring in the nut with a little angular pressure exactly as the ER-11 documentation says it should, and calipers put it at about the right dimensions, but I don’t have another collet to check with.

The only things needed to get it running not included were wires for Wall->PSU and PSU-> Speed Controller. I chopped up a spare computer power cord for the wall plug (Going to have to install a switch later), and used some more of the 18AWG stranded wire yanked from a dead ATX power supply harness to connect the speed controller. I will have to extend the leads from the motor case to the speed controller for normal operation, but that shouldn’t’ be a problem.

The speed controller has very high-rated components, and appears to be based on a GBJ2510 25A Bridge Rectifier, and two large 3-termial devices (FETs, I assume), all bonded to a ginormous aluminum heatsink under a chunky single-sided PCB. It also has a large 220uF 450V capacitor and a 200Ω RX21-10W resistor that appear to be a snubber. The assembly isn’t beautiful, but it isn’t any worse than most consumer electronics, and I didn’t feel at risk working with it. It isn’t terribly well marked, but there is enough silk-screening that I hooked it up right on the first try. There is even a jumper to switch the speed control between an onboard potentiometer and an external PWM signal, so it can be tested with just wire and a screwdriver. If I get ambitious I might take it in to campus and hook up a ‘scope to see what it’s really doing. 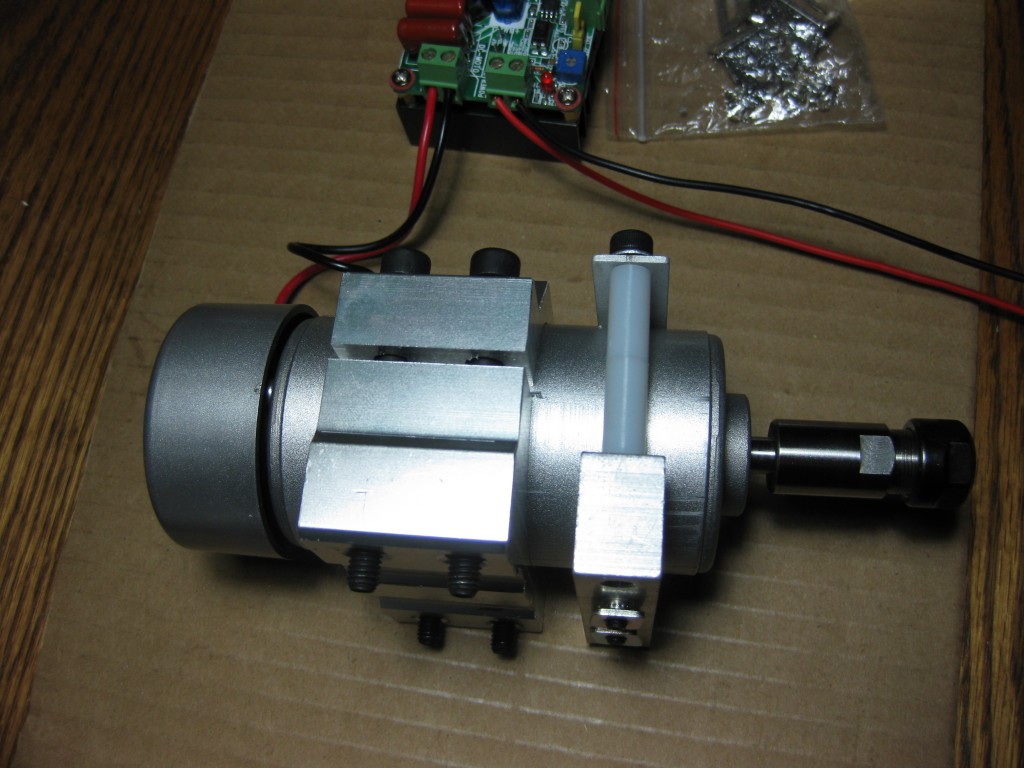 The included mounting bracket fits the motor snugly, and is designed to mount with two pairs of M6 SHCS (included) roughly 70mm apart on center. The spindle actually fits in the stock Shapeoko mounts, but the grip isn’t nearly as good as in the one that came with the spindle – I’ll probably suck it up and run it in the stock mounts, then possibly use the machine to make some kind of adapter plate to fit the fancier one to the Shapeoko’s Z axis, because makerslide is not going to mount the larger bracket directly.

I haven’t cut with it yet, but just running on the bench I’m impressed. Running at full tilt is significantly quieter than most vacuum cleaners, and sounds kind of like a moderately-loud rack-mount server. There is a little bit of high-pitch whine at low speeds, but that is typical of a DC motor with a chopper. I let it run with no load at medium speed for a few minutes and don’t feel any appreciable heat coming off any part of the system. More impressive, there is so little run-out that the “V” between the flutes at the end of a center-cutting endmill looks sharp edged while spinning.

I’ve also been working on some more belt tensioners. Belt-on-the-outside makes belt tensioning hardware harder, since it isn’t inline with the end-plate holes. There also just aren’t as many people doing it, so I haven’t seen anything on the forums that I’m terribly impressed with, and I’ve been trying things as they come to mind. In a previous post I built a pair of aluminum plates with a hacksaw, drill and hand files that work pretty well, but they are hard to establish tension with, and are too thick for the hardware I have them attached with. I have them off at the moment because I’m afraid the bad engagement is going to strip the threaded aluminum in the end of the makerslide- I think it would be fine I replaced the hardware with some M5-0.8×12 SHCS or so, but they’re still rather large and fussy to replicate, and I need a second set of attachments. 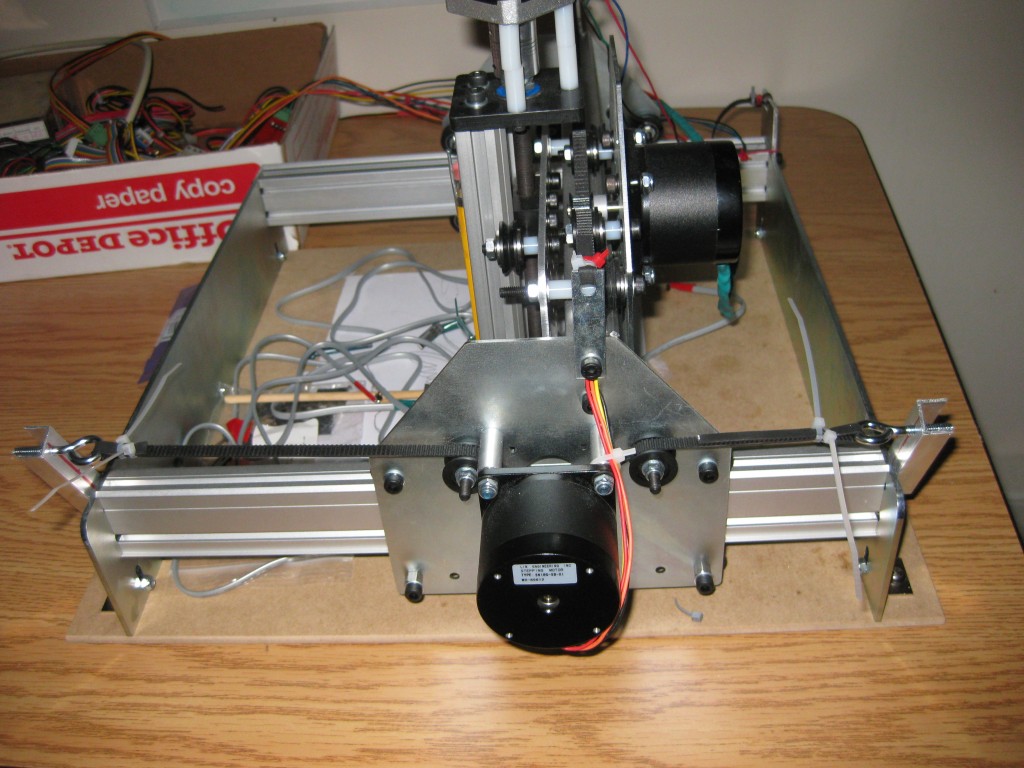 I have a couple pieces of Aluminum C-Channel from the previous CNC project, and C-channel has a wonderful property that it is ridiculously stiff for it’s size. I saw this eye-bolt based approach, so I decided to combine the two, as pictured above.

I’m not terribly pleased with this pair either – the 3/16″ eye-bolts (smallest machine-screw type eye-bolts I could find locally) are too big and interfere with the end of travel, and It hasn’t held tension nearly as well as I expected. I’m not sure if the fact that the belt doesn’t resonate in this configuration like the other arrangements I’ve tried is a feature or a problem. I’ll probably run it a bit on just a pair of these then decide between refining or trying something else. Either way, the Shapeoko continues to live up ot expectations as a source of interesting things.