While I was on my hardware-fiddling spree, I came across the Spiffchorder project pile tucked into the keyboard drawer of my desk. Last time I played with it I had written off the perfboard assembled one, which had been reworked so many times it looked like a solder ball, and left a working one on a breadboard. This meant it was taking up surface- and breadboard- space, and that would not do. So, I sat down, laid out a less-insane board, and soldered it up in one pass. 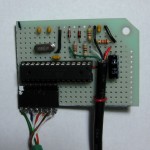 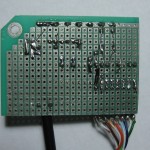 The design isn’t well suited to the individual-pad perfboard I had around (lots of n>2 component nodes), so I tried a fabrication strategy I hadn’t used before to help simplify: I almost completely populated the perfboard, ran a piece of tape over the components, flipped it, and soldered, rather than re-adding the components as I went. It actually worked pretty nicely. It is a little bigger than the last layout I used, but this one worked on the first try – or at least the first try where I had a programmed UC plugged in to the socket…

In a related matter, one of the two chips I thought I had burnt with the appropriate firmware doesn’t seem to be working, and because there is a bug with the -g flag in the current version of gcc-avr, I can’t burn another from the boxes I have set up for working with AVRs (the VUSB stack needs the -g flag).

The actual chorder I made still sucks almost to the point of being unusable, largely owing to a mistake on the particular tactile buttons I got when I ordered the parts. Eventually something will have to be done about that, but the chorder is on a header, and the project is now in an electronically working state, not taking up prototyping supplies, and can be shoved in a box when idle.