We’ve been tracking down the failure mode of power supplies in the clusters on campus, and picked up a plug-in “Power Saver” power factor corrector box for around $5 to look at in our experiments. Prices on these things range from about $5 (less than the cost of the components in small quantities… and in a nice wallwart case – this is what we paid) to over $70 (fleecing the morons).
This particular device is a “PowerSaver PowerStar CHT” (or some similar random string, the model is “CHT-001A”), about which a variety of bemusingly improbable claims are made. 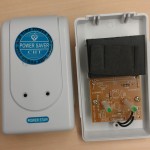 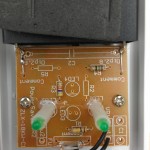 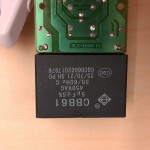 Upon opening it up, it contains a large (5uF,450V) capacitor, two LEDs, three quarter-watt resistors, and a single-sided PCB with “Comment” all over the silkscreen where fields were not filled in. As best I can make out, the resistors are a very high impedance voltage divider to step down the 120V/60Hz from the wall to a level the LEDs can handle, and the LEDs are acting as their own rectifier. The capacitor is at least connected across the outlet. Curiously, only about half the board is populated, and I can’t figure out what some of the missing components would do – they appear to be a second independent indicator LED circuit rotated 90 degrees from the populated one.
Under a very limited set of circumstances (linear inductive load, like an AC motor) these things could actually help the power factor, but since most residential power billing is net, with no power factor penalty, it wouldn’t actually reduce bills. In the case of non-linear loads, like say, computer power supplies, it will do nothing useful. Experiment complete, although it may still be plugged in while instrumented for funsises.
This entry was posted in Computers, DIY, Electronics, Entertainment, General, Objects, School and tagged China, Power Factor, Scam. Bookmark the permalink.