My post-semester “I have time to cook again!” food, Roasted Eggplant with Red Pepper Cream Sauce: 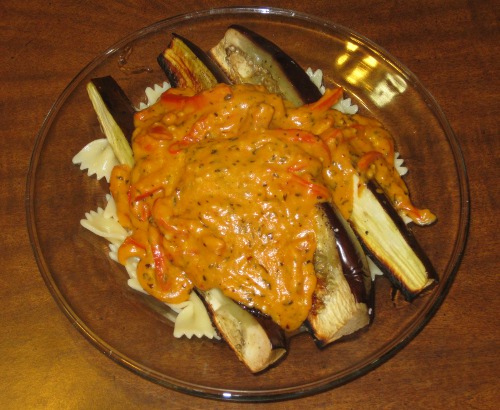 The recipe was one of those “Popped, mostly formed, into my head” things that are always the most fun to make. The eggplant is just sliced into eighths, drizzled with salt, pepper, and olive oil, and broiled until cooked. The sauce is the real fun of the affair. In one pan, I cooked down a thinly sliced red pepper and some crushed tomato in herbs, garlic, and olive oil, to make delicious red slime. 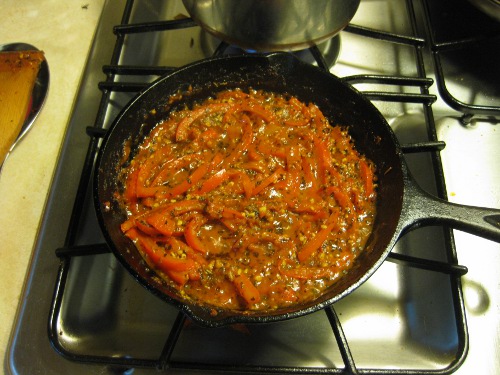 In another pan, I set up a roux with some milk, then added the pepper mixture, some appropriate cheeses for texture (In retrospect, probably would have been better without), and more milk until it reached roughly the right consistency.
The combination was served over farfalle, which the foodblogging category here should make clear is my default pasta.
I got lazy and used the toaster oven to do the broiling, so the slices were too close to the source and got a little dry/singed on the tips. I also missed on ratios a bit, and made too much roux for the volume of cooked-down pepper, so the sauce was thicker and richer than I intended. For a first pass at an unreferenced idea, though, this was a pretty solid success. Very interesting flavors and textures, particularly the herb/garlic/spice mating to the sweetness of the cooked down peppers, and the two distinct kinds of creaminess from the sauce and the flesh of the eggplant.
As a side note, making this is caused me covet knives; despite the fact that the housemates and I have a pretty nice set of knives between us there isn’t a narrow bladed slicer or a Nikiri in the house, and they both would have been handy here.

This entry was posted in FoodBlogging, OldBlog and tagged cooking, eggplant. Bookmark the permalink.