Espresso is unfortunately one of those holy grail hobbies. Once you start making your own, you will forever be trying to make “The Shot;” a perfect, sweet, rich, tiger-striped shot of coffee that manages to be life affirming in only 1.5 ounces. I once managed to get a near-perfect shot out of a former housemate’s comparable setup on a fluke, and it got me hooked. In that interest I just picked up a conical burr grinder, which is the last piece of coffee paraphernalia required for a proper coffee-dork setup. This brings my coffee paraphernalia up to a little over $300, for the following: 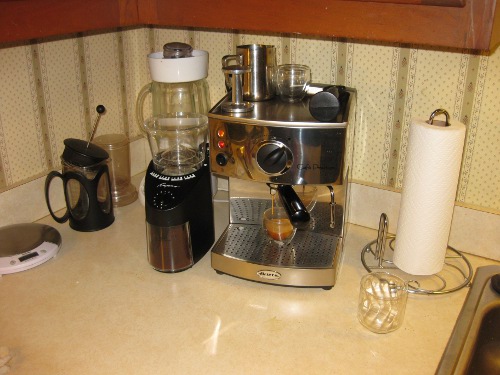 Pictured:
Lello Ariete 1375 Espresso Machine – Not a great machine by any stretch of the imagination, but very nice for $200. It has a chromed brass portafilter, mostly metallic construction, a thermoblock heater, and a pump that can (at least in theory) generate 15 bars of pressure. I still can’t get a perfect shot out of it (barely 20 second extractions, and they start to show some bitterness at even that), but it has only had one (easily cleared) failure in 10 months of use, and even my sleep-addled brain can get a shot better than what Starbucks serves out of it every morning. I’m hoping I’ll be able to get longer, more consistent shots by adjusting the grind now that I can get instant feedback on small batches. My only complaints on the machine are related to the steamer wand sometimes being a little slow to pick up (sprays hot water before steaming, but works very well with good technique once it gets going), the system dripping out the portafilter after the machine has been used, and the drip tray corroding easily and/or not catching liquid from internal venting.

* New Addition: Jura Capresso Infinity 560 Conical Burr Grinder – I used to not believe in the “good grinder is as important as a good machine” mantra, but after fiddling with some friend’s grinders in the past, and noticing tangible degradation of shot quality over the course of a pound of ground coffee, I’m now a believer. I’ve only put a couple ounces of coffee through the new grinder, and only at one setting, but it made nice, even, cool grounds, with virtually no flaking. The only things I’m not terribly pleased with are the cleaning procedure between different beans (it retains a lot of grounds inside the workings), and the amount of static it generates in the catch basket. My sentiments seem to be matched in other reviews as well.

* RSVP Terry Tamper – A perfectly usable, well regarded metal tamper, way, way, way better than the horrible scoop-end plastic ones. Mine had some nasty cast lines, which I have ground off the edges of 49mm end with hand files; it still sometimes pushes some grounds over the edge of the basket, but its a lot cheaper than equally regarded alternatives, and I’m sure I’ll eventually get it stoned smooth.

* Bodum Pavina 2oz glasses – These things are way more expensive than necessary, but they are so cool. Double walled, single blown glass, so the contents look like a 3-d parabola floating in space. One of mine has a hairline crack from “rough handling” in the dish rack, but I’ve been continuing to use it anyway, and it doesn’t seem to be spreading.

The Bodum French Press in the picture belongs to one of the housemates; we also have a drip maker tucked away somewhere, but it didn’t get used enough to justify its counter space with the better options on hand. The sharp eyed caffeine junkie will also spot an ingenuitea in the picture; that corner has become our little altar to caffeination.

All told, my setup costs less than a typical “nice” espresso machine (this is just a hair over minimum cost of entry for real espresso setups, they head off toward infinity at an alarming rate), and, with good technique, is capable of producing drinks at least on par with most of the local coffee houses, so it is a success.

This entry was posted in FoodBlogging, General, Objects, OldBlog. Bookmark the permalink.