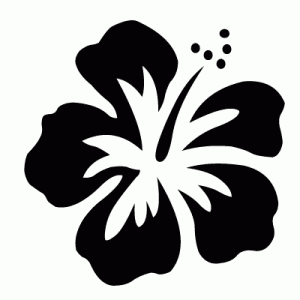 I’ve had the idea of a “Hackbiscus” emblem rattling around my head for a while, and I was contemplating it again as a possible option for theming the new blog. The idea is to have a hibiscus with it’s stamen arranged in the pattern of a glider(⠠⠵).  The glider has been suggested, and weakly accepted, as a suitable emblem for hacker culture.  Even better, most Hibsicus really do have five Stigma, so it is biologically correct.  With my affection for Aloha shirts and both Hawaiian and Hacker culture, it seemed like a good sigil… and the pun on “Hacker Stigma” is too good to pass up.
It should be an easy trick to make; take one of the common outline images of a hibiscus (It turns out there are about 10 of them from which nearly all prints/stickers/etc. are derived), pull it into GIMP and massage the dots representing the five stigma into the correct pattern.  The problem with this plan is I’ve never found an example of the separated-stamen pattern larger than an oddly aliased 400×400 gif. The solution to that problem arrived the other day when my advisor showed me how to use the Trace Bitmap tool in Inkscape, during a discussion about preparing images for the Silhouette SD cutter the group bought recently to use in some projects (more on that later, hopefully).   I’ve never had good luck working Inscape in the past, but decided to try it to get a nice resizable smooth-edged Hackbiscus. I got excellent results with only a little bit of parameter fiddling, as shown above (although, that is 400×400 like the source image. It scales up indefinitely, promise).

This entry was posted in DIY, Entertainment, General and tagged GIMP, Hackbiscus, Inkscape. Bookmark the permalink.