I recently got tired of the collection of junk I carry* punching holes in my pockets, and set out to improve the situation. It turns out there isn’t a good commercial solution to the problem;
“Normal” pen cases like you can get from leather shops and pen companies are designed for protecting a small number of nice (large) writing instruments.
Pocket protectors are rather specifically designed for breast pockets, which I usually don’t have.
So, I went the DIY route, and built a couple prototype shapes out of paper and tape to see what looked right, and pretty quickly settled on a rough design.
I then built a quick and dirty prototype (below) out of duct tape and paper, which I’ve been subsequently tweaking with use (note the funky seam that separates the flash drive and chap-stick. Added later. With staples.). Eventually, once I get the layout perfected, I think I’d like to build a nice one out of black leather, but we’ll see if that ever happens. 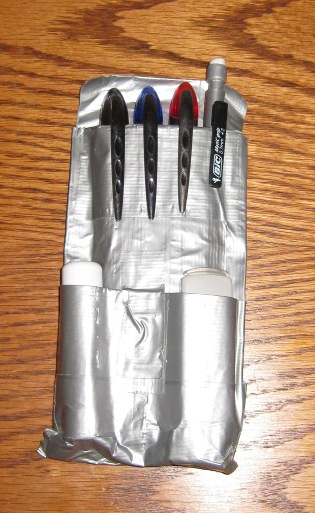 Apparently some other (more famous) people are also, to use their phrase “inordinately proud” of their every day carry organizers. Jake von Slatt has a Purse Organizer (via MAKE) that is built in a similar fashion. I am, however, neither man enough nor inclined to give in and carry a purse (that’s what cargo pants and belt clips are for), despite my un-masculine attraction to bags.

*I ordinarily have the content below attached to me (horribly specific because it has been very consistent for quite some time): 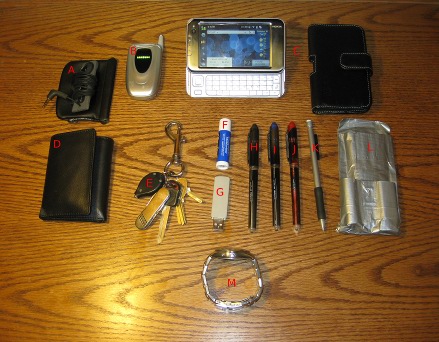 …and I’ve been considering adding one of the smaller multitools, like a Leatherman Juice S2 to the collection.

Hopefully I’m carrying all this stuff in a way that won’t come back to haunt me like the classic spine problems from carrying a wallet in one’s back pocket thing.

I am apparently not alone devoting so much attention to the junk I carry; there is an entire community devoted to crap people carry with them: enter edcforums (which I have browsed, but haven’t joined. yet.) Then again, “There’s a community on the internet” is in NO WAY an acceptable standard for normalcy or acceptability.

This entry was posted in DIY, General, Objects, OldBlog. Bookmark the permalink.