Print Your Own Heat Shrink Labels for Factory-Chic Wire Naming

Article note: Hmmm. I have a D1 printer, and thanks to this article I now know that unsupported P1 printers can be tricked into running heatshrink. The internet tells me they also make D1 cartridges full of heatshrink...the combination makes me very curious. Unfortunately, it'll cost me at least $30 in examples to decode the sense holes on the P1 carts, and a quick search hasn't turned up an answer.

Heat shrink tubing is great for insulating wires. Labeling wires in a bundle is always useful, too. [Voltlog] has a cheap Brother label printer and discovered he can buy knock off label cassettes for a lot less from China. However, he also found something else: cassettes with heat shrink tubing in them made for the same kind of printer. Could he use the heat shrink cassettes to make neat wire labels? In his first video the answer was sort of, but not really. However, he later had a breakthrough and made a second video explaining how to do it. You can see both videos, below. 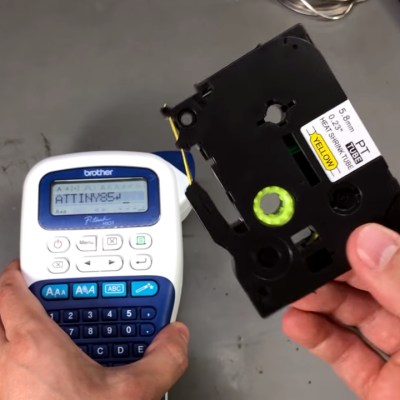 At first, the printer didn’t even want to recognize the cassette. It seems like Brother doesn’t want you using exotic tapes with cheap printers. No worry, this isn’t sophisticated DRM, just a sense hole that you need to cover with tape. This discovery was made using the extremely scientific trick of covering all the holes that were not on a regular cassette.

With the holes covered up, the printer worked, but the print came out mirrored. To understand why, you have to understand how the normal labels work. In the cassette, the label material has no paper backing which is separate in a different part of the cartridge. The printer marks the backside of the see-through label and then bonds the paper backing to it as it exits the printer. This makes sense because it puts the markings under the tape where they are relatively safe from moisture or physical abrasion.

However, with heat shrink, it isn’t transparent and there’s no backing material. So the reverse print doesn’t really help you. It turns out the cheap printer can do non-mirrored printing, but to make that work, one of the holes in the special cassette needed to stay open. Once the proper holes were covered and uncovered, everything worked great.

Heat shrink is probably more high tech than you’d think. Did you know you can get it with adhesive inside it, too?