Most of the load of crap I ordered from DealExtreme about a month ago has arrived, and it is all fun. This is the second time I’ve ordered things form there, and I’ve always set my expectations low enough to be quite pleased; it takes forever, and the stuff you get is shoddy, but it’s all cheap enough to make great toys, especially with things that wouldn’t be worth buying at normal prices. 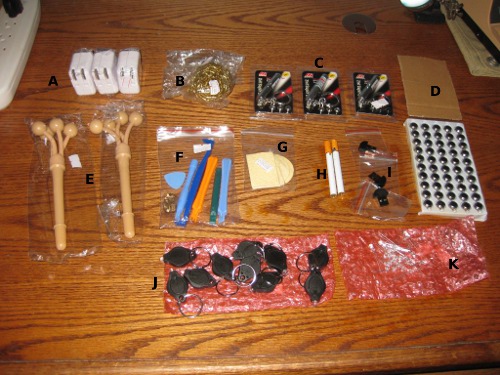 This shipment (including one Bluetooth dongle that arrived earlier because I botched the quantities when I ordered) includes:
A – 3 USB Wallwarts (to use as regulated 5V power supplies.. these things can pump out 1A)
B – Brass Sponge(for soldering iron cleaning)
C – 3 LED/Laser Pointer doodads
D – 50 LR44 Batteries (C lied, they take LR41 batteries, but there are plenty of LR44 things around)
E – 2 of The Quadboob Pen, a serious contender for the strangest manufactured object in the world.
F – A nice spudger set (for opening consumer electronics without damaging them)
G – Some Heat proof sponges (also for soldering iron cleaning)
H – 2 Cigarette-shaped lighters
I – 3 USB Bluetooth Dongles — all of which at least losely work after a little prodding
J – 10 Keychain LEDs
K – 20 UV LEDs — There are lots of cool projects with UV, and the electronics places charge a fortune for the things.

To explain a couple of the items:
I’ve been carrying one of the lighters from a previous batch in the side of my Leatherman’s sheath; it has come in handy a couple times for sealing off shoelaces and the like. Mine is falling apart, so I figured at $1.50 a pop, I may as well get two more.
The quadboob pen… 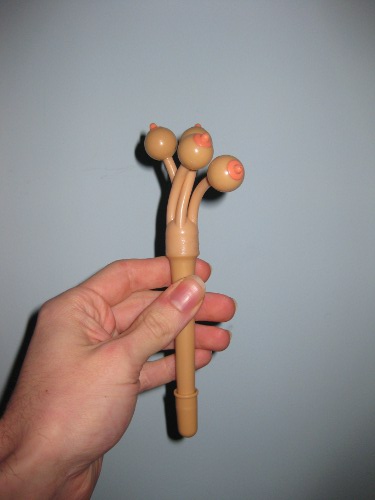 Well, some frineds and I spotted the quadboob pen while drunkenly contemplating the interent one night, and I had to order some. They are truly bizarre, the breast pods are clacky hard plastic, and the tentacle/stalk things are an unpleasnt rubbery texture… At least one of them is to be gifted.

And the LED keychains. I have a single nice one that cost about 30x as much as each of these, and it’s incredibly handy, so they seemed like a good thing to have. Also, I have lots of 5mm LEDs of various colors around from projects, and it’s easy to mod them to make cool colorful LED keychains: 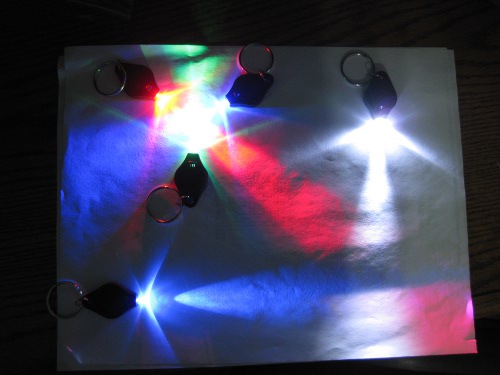 The extra “Blue” one at the bottom is one of the UV LEDs; It’s not far UV, but it’s enough to light up the security strips in IDs and currency and such, which makes for a pretty cool toy.
I have a couple other things that shipped separately in that order coming; most significantly, a knockoff Wiimote, which in combination with the Bluetooth dongles and some IR LEDs should make a great toy.
Hurray for cheap crap from China.

This entry was posted in General, Objects, OldBlog. Bookmark the permalink.