While rooting around one of the labs to clean up for E-Day earlier, I ran into the pile of old Compaq Aero 4/25 subnotebooks the group has never disposed of, and played with one for a few minutes. Here it is next to my current machine: 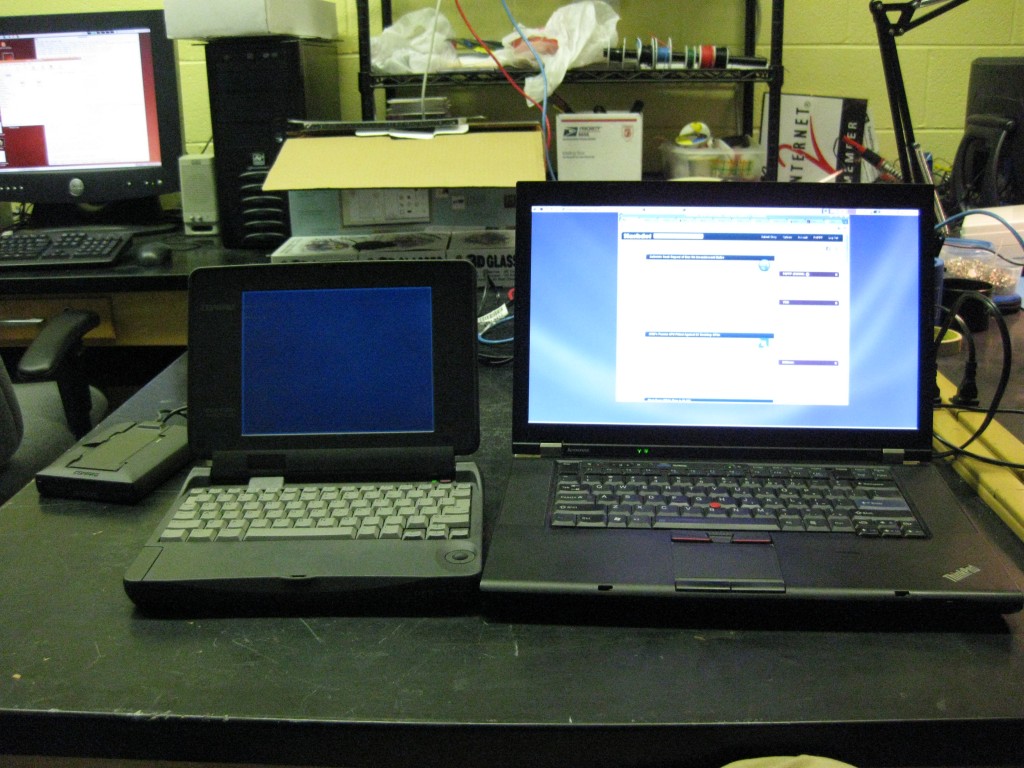 These charming little things are the forerunner to the modern netbook, and, like many of the early subnotebooks, have something of a following. These particular examples spent much of their lives as The TTL Papers Microcluster, and are hence in surprisingly good physical condition for 15 year old hardware. They are set up to dual boot the tweaked MS-DOS/Windows 3.1 environment they ship with, and, unless interrupted, automatically continue into Linux via loadlin, an arrangement I suspect has to do with the lack of an obvious user-accessible BIOS layer. I once coaxed the PC Compatibility card in a Powermac 6100/66 to boot Linux, this appears to entail similar acrobatics, with “quirky” hardware and a bizarre boot sequence.
The machine is remarkably usable and responsive, especially under Linux, despite the fact that the “4/25” in the name refers to the 4Mb of RAM and 25Mhz 486sx that form its tiny little heart. It makes a terrible reminder of how bloated software has become. Someone clearly put some care into the OS on ours around 1997 and built a pretty nice system, with a 2.0.27 kernel, reasonable selection of utilities, remarkably attractive monochrome DIR_COLORS (which I spirited off), GCC, and Vim, in addition to the AFAPI/PAPERS materials. There is no X server (which is to say, the installer wasn’t obviously insane), but there is also no screen or workalike I could find. I don’t see much evidence of any distribution I know was around at the time, and the kernel is clearly custom built, so it may well have been a fully hand-rolled system. The fact that the internet is full of stories about how uncooperative Aeros could be, and that the leading digits of the kernel version being “2.0” strongly suggest it is a seriously, incompatibly old-school setup, indicate that while it would be fun to tinker with, it probably isn’t a good idea.
The little machine brings home the point that a keyboard, a screen, and a roughly POSIX-like environment in a portable package is, was, and will continue to be most of what a portable device needs to be a desirable thing.
This entry was posted in Computers, DIY, General, Objects, School. Bookmark the permalink.