My new laptop arrived thursday, and it is a beautiful thing. 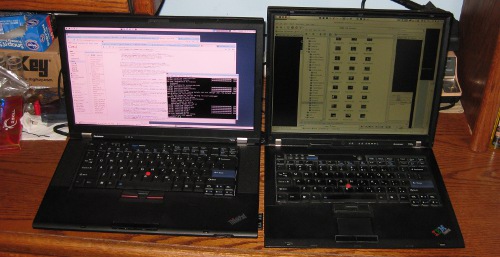 (It should be pretty apparent which one is the new one…)

Like a good geek, the first two things I did, after booting it up to check that everything worked, were opening it up to poke around and upgrade the RAM (Like all OEMs, Lenovo WAY overcharge for RAM), and blowing away the included Windows Whatever(tm) install for an ArchLinux system (and a smaller partition with a …”fixed”… copy of Windows 7 for games and such).

Just to keep them together:
Things I like:
* The screen is GEORGOUS, bright, good colors, and 1920×1080 is a whole lot of pixels. Way, Way better than the T60p, even when it was new.
* This thing is a powerhouse. Not “Mindblowing” fast, but close, and 8GB of RAM covers a multitude of software sins.
* nVidia graphics, simply because the nVidia drivers are a lot less of a hassle than the ATI ones under Linux.
* SD Slot – I have lots of SD-using devices, it seems to be the defacto standard, having one built in is super handy.
* Build quailty – It feels sturdy. Actually, even sturdier than the T60p, no squeaks, rattles, or flexing.
* Rounded edges – They screw with the classic Thinkpad aesthetics a little bit, but it means the angles where the palm rest has a sharp edge in your wrists are gone (except for one spot on the right where the latch sits).

Things I dont’ like:
* The textured, flush touchpad is TERRIBLE on first use. It is clumsy to use (different resistance pushing and pulling), feels bad, and doesn’t have recessed edges to put your finger against when scrolling. I’m one of those weirdos who actually likes touchpads, and the one in my T60p is excellent, so this is quite a disappointment. I seem to be acclimating, but it still isn’t as comfortable as it’s predecessor.
* The machine is bulky; If I could have a new 4:3@15” with decent (>1050 vertical lines) resolution I would have gone for that, but they simply don’t make them anymore. 16:9 is a stupid shape for computers. Unfortunately, all my stuff is sized for 4:3@15”, so despite my careful purchase of a matching sleeve, the damn thing doesn’t fit in some of my normal bags and accessories.
* There is a cutout in the palmrest for some part I don’t have, I think a pantone color calibration sensor? or possibly the fingerprint reader? with a blank cover in it. My fingerprint-reader-less T60p has a smooth palm rest with no slot, I was hoping for the same.
* No ThinkPad goodie bag. My T60p came with a variety of extra Trackpoint (eugh) nubs, some “security” (Torx) screws, and some other trivial accessories. It was a nice touch, that is now gone.
* Exposed optical eject button: This thing is so well designed it’s really noticeable that there is an oversight in that the eject button is placed where it is pressed when picking the laptop up by the sides.

Most of the gripes are incredibly minor, and I’m really, really pleased with the machine. I’m Currently in the process of taking it from “shiny new piece of hardware” to “home,” which takes a while for me. Most of the configuration is working well, even the parts I’m doing differently (trying to avoid tpb and use direct acpi or xfce features). Convienently, Arch just added a proper multilib repository (literally the day I got the machine), so none of the old 64 bit OS disadvantages are asserting themselves.