Posting up my notes from SC13 is another thing I didn’t get to during the end of the semester. Remedying now.

The main takeaway sequence from conversations on the floor is as such:

The other really exciting thing that it seems AMD is going to make it, and more. Their lean period finished when the payoff on the XBone/PS4 came in, and they have a VERY good plan for the next >2 years. It works with the premise above about single-core/die MIMD performance ending, and points in the HSA direction – this is the crazy parts with MMUs so a CPU and GPU can share memory without skew penalty and such. ARM and partners are also generally pointed that way, and have been for some time, though apparently AMD isn’t getting out of the x86 game, but it does look like they are getting out of the fat core game.

Interesting Conversations:
As always, many of the best things at conferences are the conversations that happen. A couple particularly good ones:
Vojtěch Pavlík (Director, SuSE Labs)
I was one of the only people to show up for an in-booth talk about the kernel update process, so it ended up being less of a talk and more of a conversation about the computing ecosystem. The person slated to give the talk was Vojtěch Pavlík, the director of SuSE labs, who had very interesting things to say. We agree on the idea that you can generally blame the graphics vendors for many problems in the stack (related to the intended talk; OOB modules are the maintenance problem), another round of the “The era of substantially-increasing single core performance is over” discussion, some interesting thoughts about NUMA and the fact that suddenly storage is getting faster relative to the rest of the components, which changes things system-wide. We also talked about the general problems with ever-growing cache hierarchies. On the way out, their booth boss handed me an unusually nice backpack full of awesome swag on my way out, so I’ve got a SuSE hat to go with my Redhat cap, and one of the stuffed chameleons for my FOSS mascot menagerie and whatnot.

Anderas Olofsson (CEO of Adapteva)
Adepteva manufactures many-core RISC parts. He stopped by our booth drawn by the meta-state conversion/mog/nanocontroller stuff. Wants to know if we want a university program participation, because we have compiler tech that might do us both good. Option for free toys. (This is the parallela “$100 supercomputer” people. He had one of the boards riding around in his pocket.)

Miachel Wolfe (Senior Engineer, PGI)
While I was doing the demo circuit (for a shirt) in the PGI booth, Michael Wolfe was actually doing one of the demos himself. I mentioned that I am a compilers person checking out what they’re up to, he checks the badge, says “Oh, you’re one of Hank’s. That’s all right, we’ll talk to you anyway” and gives a bitchy, pointed version of the demo. I still don’t entirely understand why they dislike each other so much, but apparently it goes way back. Kind of amusing.

Burton Smith ( MSR and/or “Whatever he wants”)
We ran into Burton on the way back from dinner. He seems to have become bored with the elliptic optimization thing (with idle process (power conservation) as a task rather than resource) he was working on for the last couple years (which was itself kind of amazing), and MSR provided him access to one of the D-Wave quantum machines. He’s working on programming models that handle the destructive-reads situation and various other constraints well, and is in particular working with Refined Languages … aka, the thing Hank earned his PhD for. I don’t think I’ve ever seen someone be paternalistic toward Hank like that (“I’ve been trying a refined languages approach from someone’s PhD *smirk*”) or get flattered/embarrassed that way before. Randy seemed to have the same impression because he gave Hank some crap about it. I haven’t read as deeply about that as I should, but I think I get the general idea.

One last note on people: There were young, American, and very technically sophisticated women on the floor in non-trivial numbers. That was extremely refreshing.

And finally,
The Swag Review: 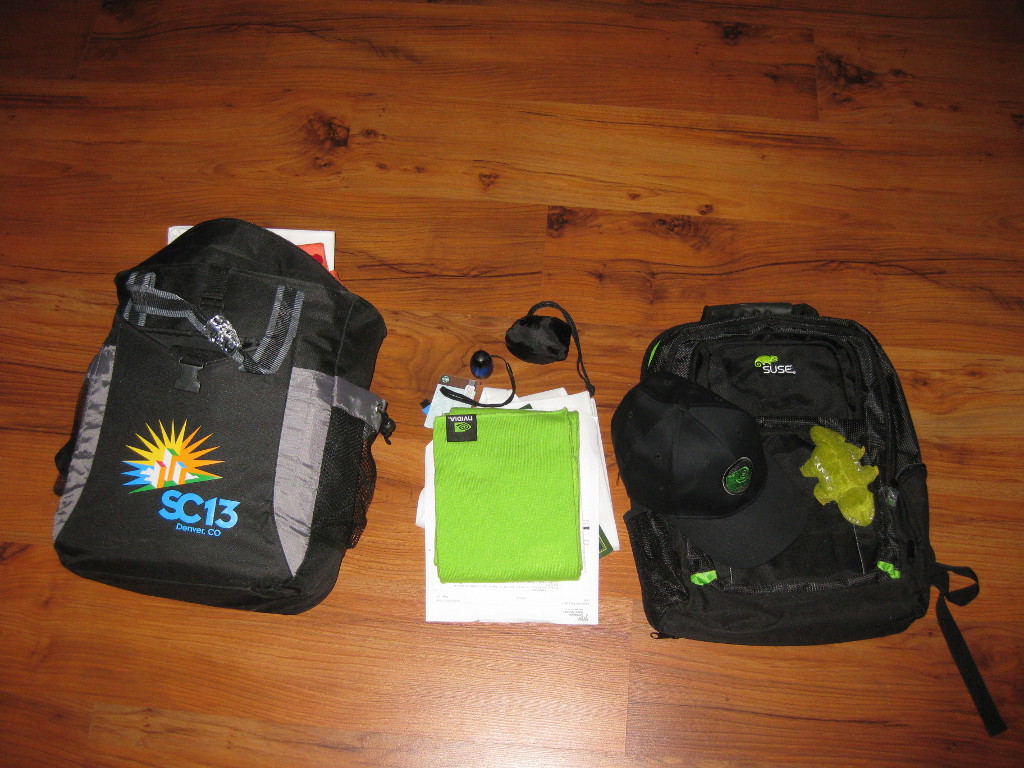 This is what I shipped back. 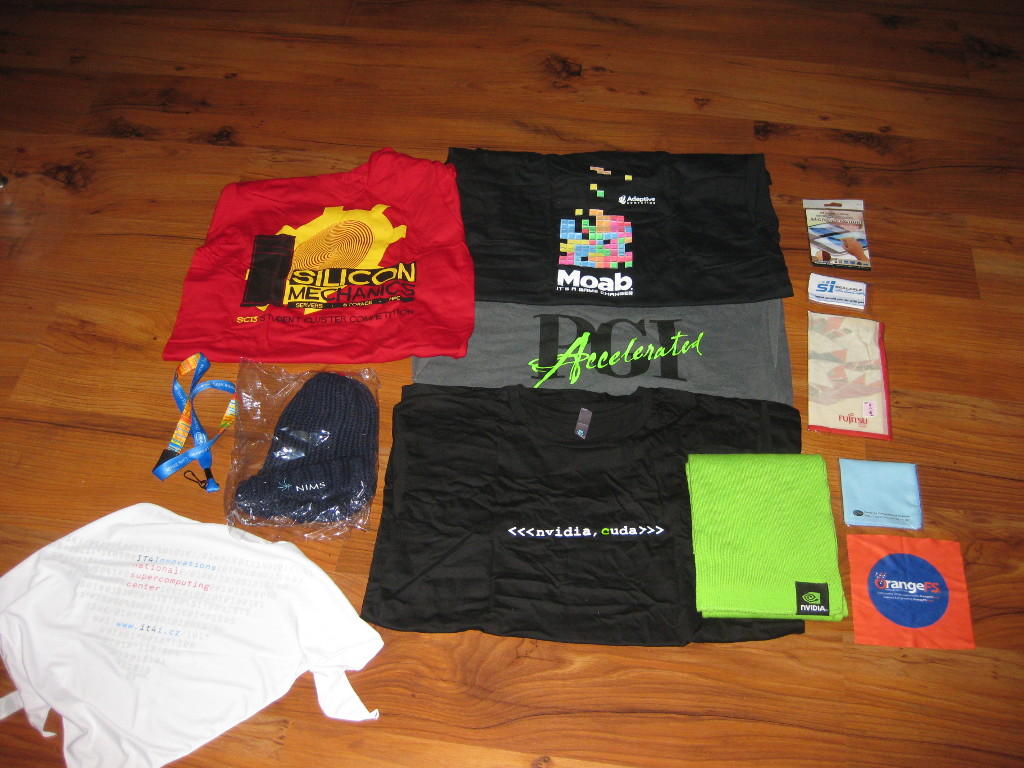 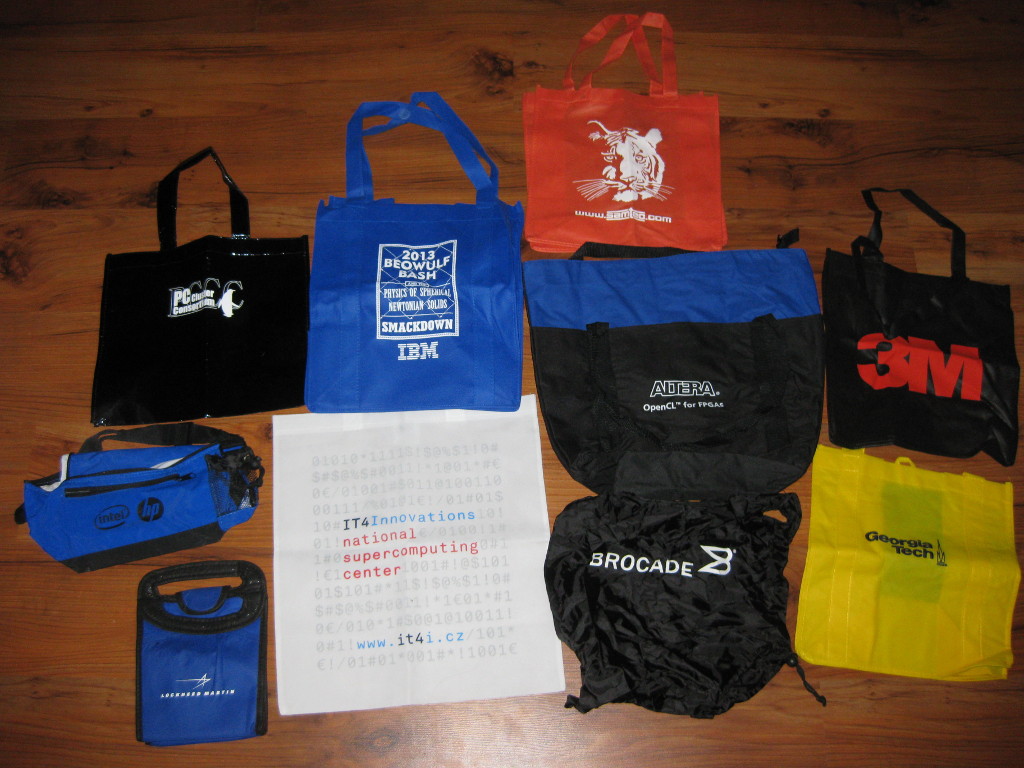 This year’s bag haul. The little insulated thing from Lockheed should be genuinely useful. 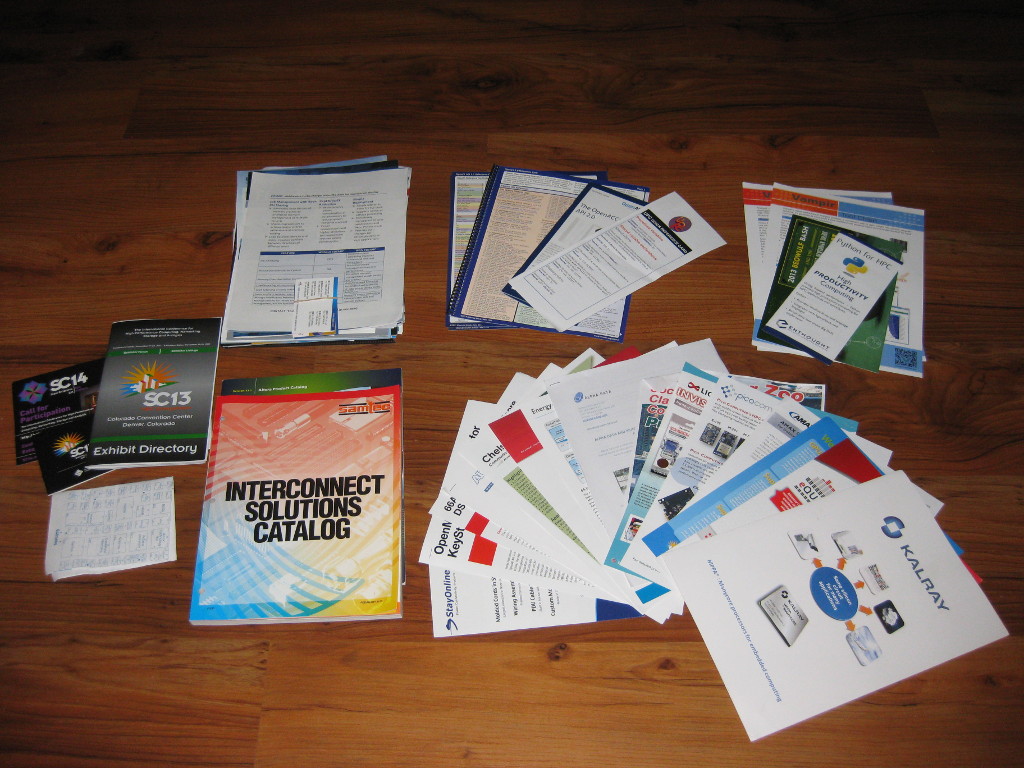 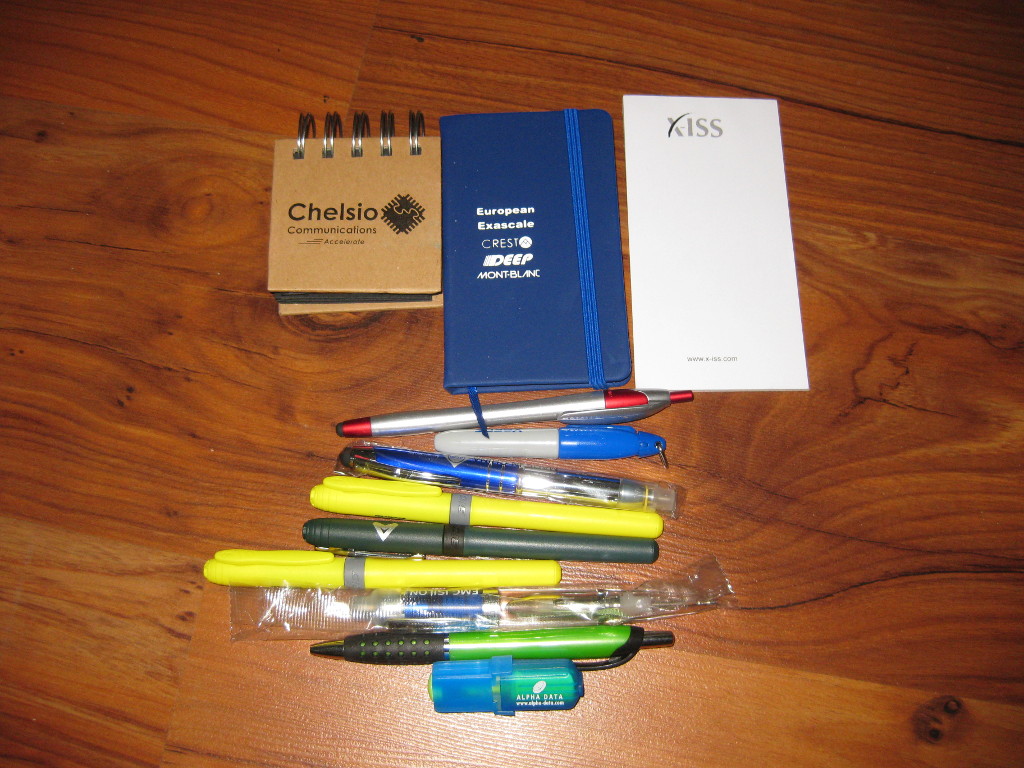 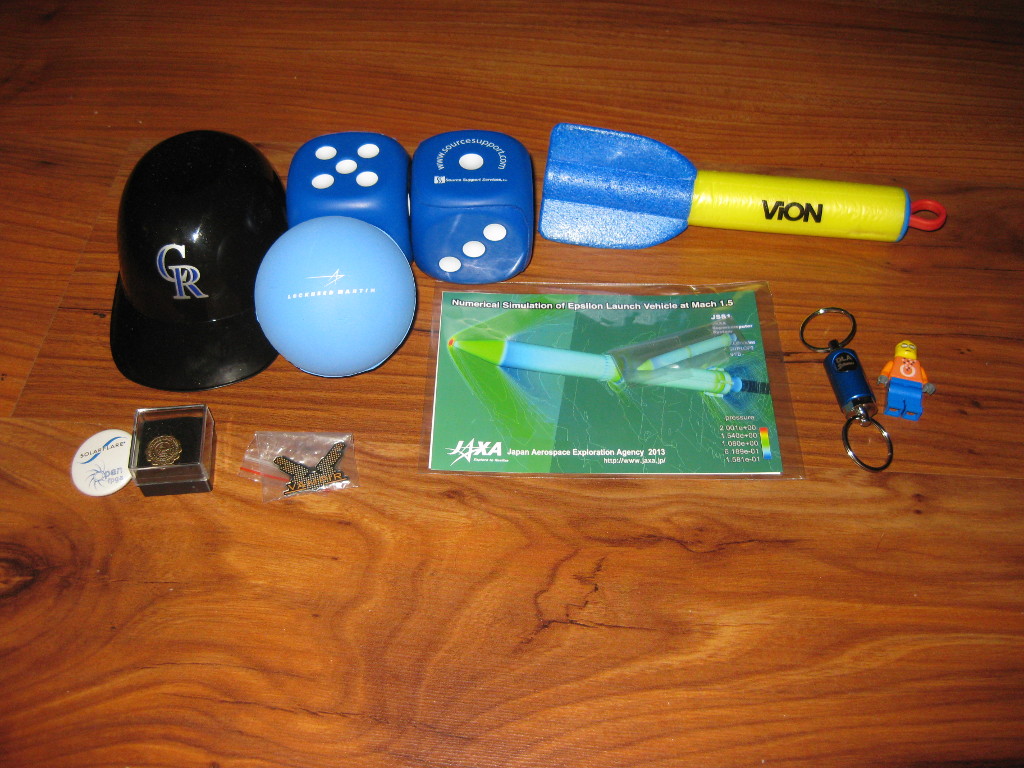 Strictly toys. The little rocket in the bag was made on one of the fancy color 3D printers. 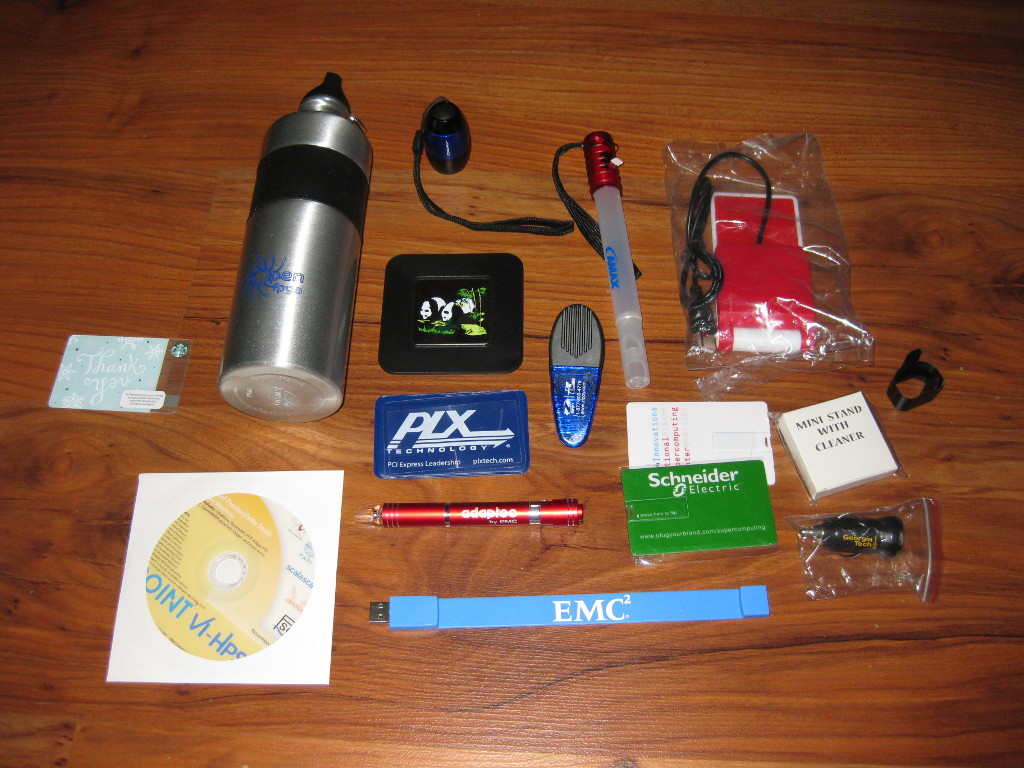 Tool-type swag. Adepteva’s lighted screwdriver is extremely nice. Half the USB devices present themselves as HDI devices rather than having significant storage. 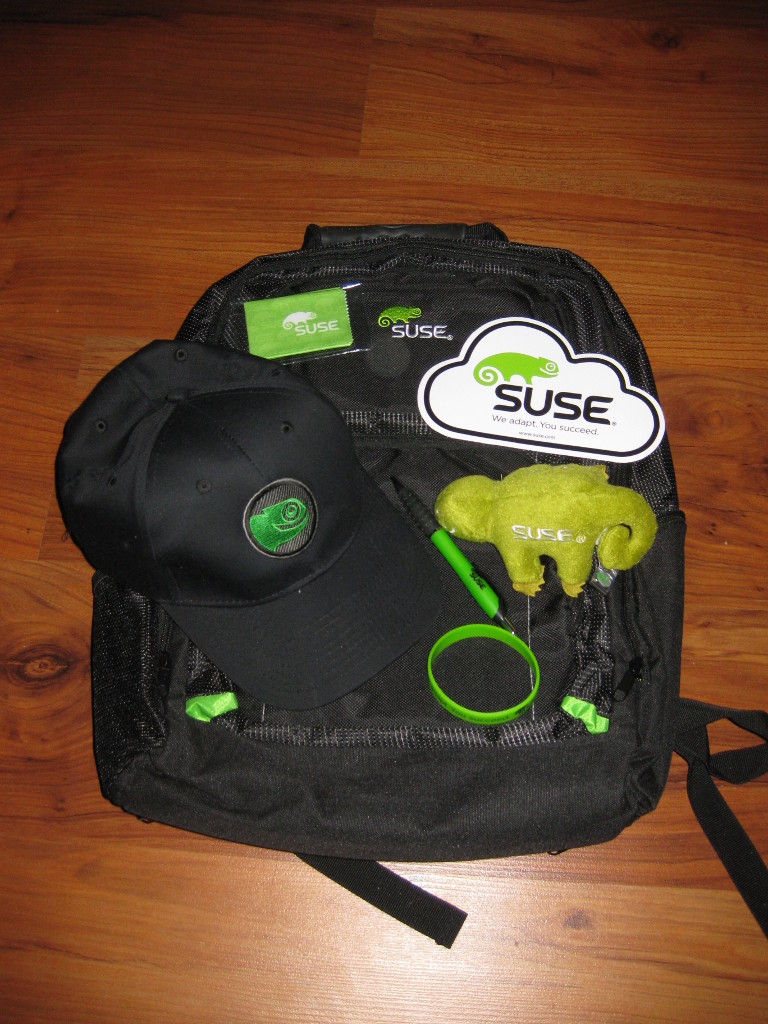 The bag of goodies I got form Suse.