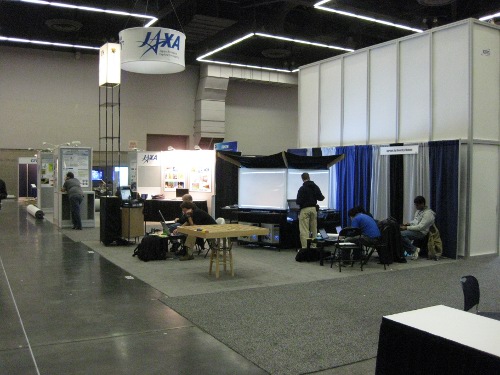 The aggregate.org booth is cheap. Really cheap. So cheap that most of the major vendors have single pieces of hardware that cost more than our entire booth. But we still looks classier than all but a handful of the booths on the exhibit floor. This is because we were clever. Where other exhibitors have 42”+ LCD screens, we have large swaths of plasticized paper, wrapped around a modular shelving frame, and rear-projected to by a bunch of old XGA projectors. Because all displays have black backgrounds, we have what is visually four, four foot diagonal displays with no edges. For less total cost than a single 50” LCD. The group has been using a rig like this for years.

I’ve already written about the sign tower. It’s now complete, and is the kind of object that other people use as a beacon to navigate the show floor. It is also the mount for our previously mentioned slow update skycam. 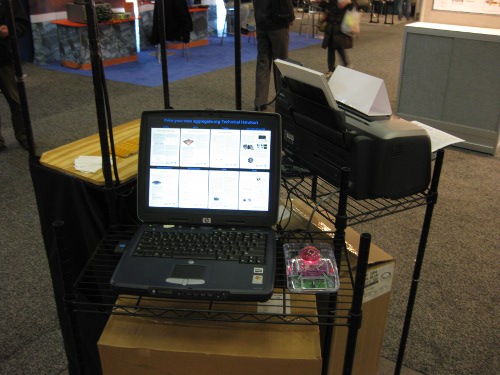 A new clever widget of ours is the on-demand handout printing system. We new we wanted on-demand printing, so we brought a printer, a big lighted trackball, and an extra (decade old) laptop. Over the course of the morning, I assembled an intentional-, professional-looking setup. Originally, I was envisioning a simple, full screen, GTK application, but setting up one-click printing in GTK is a pest, so I came up with a much, much better hack (erm…solution): HTML. I made a simple HTML page, with a table of captioned 300px wide thumbnails of the technical handouts, linked to the real PDF files. I then abused the Firefox settings on the laptop, so that the default automatic handler for PDF files is… lpr. One click, and the requested file is automagically printed, in a separate background process, with the queue managed transparently by CUPS. Set Firefox to full-screen display, and, with a little bit of styling, instant classy interactive on-demand printing interface, that isn’t an obvious hack job. Based on opening night, the slow printer is having a little trouble keeping up with demand, but so long as we keep a reasonable buffer, the system is really nice, and the slight delays it produces have repeatedly given visitors a chance to latch on to one of our other projects.

Thus far, definitely a fun conference, with lots of neat things to do. Also a really, really large conference; the woman at the checkin desk at our hotel said the conference took up about 6,000 rooms,and the idea of 11,000 or 12,00 attendees isn’t incongruous.