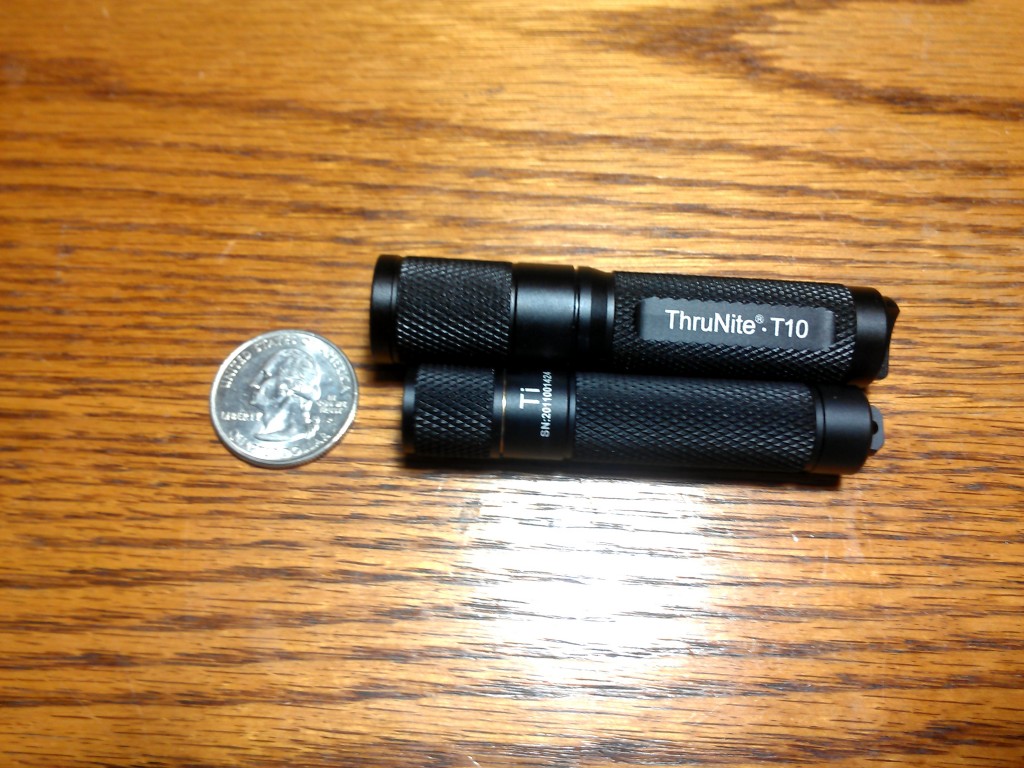 I recently decided I wanted a “reasonably nice flashlight”, and discovered that “nice flashlights” are objects of serious obsession. Originally I was planning to just throw something attractive in to an Amazon or DealExtreme order, but then I started reading reviews from EDCForums and CandlePower, and… uh… this happened. The important thing I leaned is a lot of lights have ridiculous tacticool features, like dazzler or SOS blink modes, or design features to improve their use as a Kubotan and damage whatever touches them in a pocket or bag, and set out to avoid such things.

Eventually I found my way to BudgetLightForum where interested people who do not think it is reasonable to drop hundreds of dollars on flashlights reside, and based on feedback there, decided to try the combo deal ThruNite had running to get a AA T10 and a AAA Ti for $30 for the pair.

They showed up today (in nice packaging) and are rather interesting, so pictures and text below.

The knurling, machining, and anodizing on both is excellent, and they feel quite nice in the hand. They are nominally quite waterproof, and the lenses are made out of something that feels intensely tough, and are nicely protectively recessed, so I don’t see wear being an issue. I’m quite certain they will die from loss, not breakage. 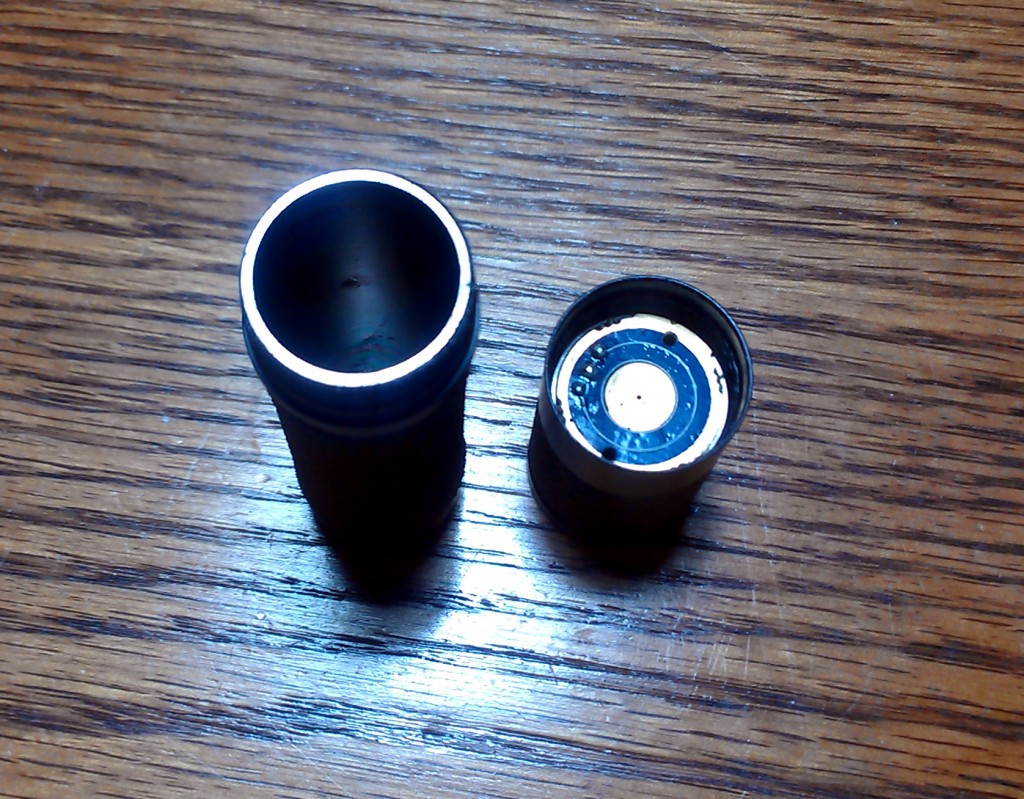 The T10 is slightly smaller than I expected, which is preferable (I could actually see carrying the thing regularly). I’m not sure what sort of regulation mechanism it uses, but there is no sign of low-frequency PWM flicker (and I’m quite sensitive to such things from working with electronics) and it doesn’t warm up alarmingly, so it doesn’t appear to be resistive, which puts it in the realm of working magic. The light it throws has a very high color temperature (bluish tinge), somewhere upward of 6000K. It throws around a 30° even bright cone with a second dimmer evenly lit cone at about 90°, with just a bit of visible structure. “Firefly” is a nice level to do nearby tasks without seriously damaging one’s night vision, “Medium” is instinctually what a light of this size seems like it should throw, “High” is “I’m still seeing spots after sweeping my vision 10 minutes ago” bright. It has a sort of triangular pattern machined in to the bottom, with a hole under one leg, so that it can both accommodate a lanyard ring and tail stand stably.

I couldn’t find much information about how the T10’s three modes + memory from a twisty control works on the ‘net when I was looking, and it is a bit confusing at first, but once you get the design is pretty solid. Here’s the deal: each time it is turned off and back on in rapid succession, it increments the mode by one, going through Firefly (0.09Lm nominal) (off and on) Low (9Lm nominal, which I think is an under-estimate) (off and on) High (115Lm nominal). If it is turned off and left off for at least 3 seconds, it remembers the last mode it was in, and the next time it comes on will come on at that level. It does make it a bit difficult to determine what will happen when picking it up cold, but retaining a desired setting is useful. 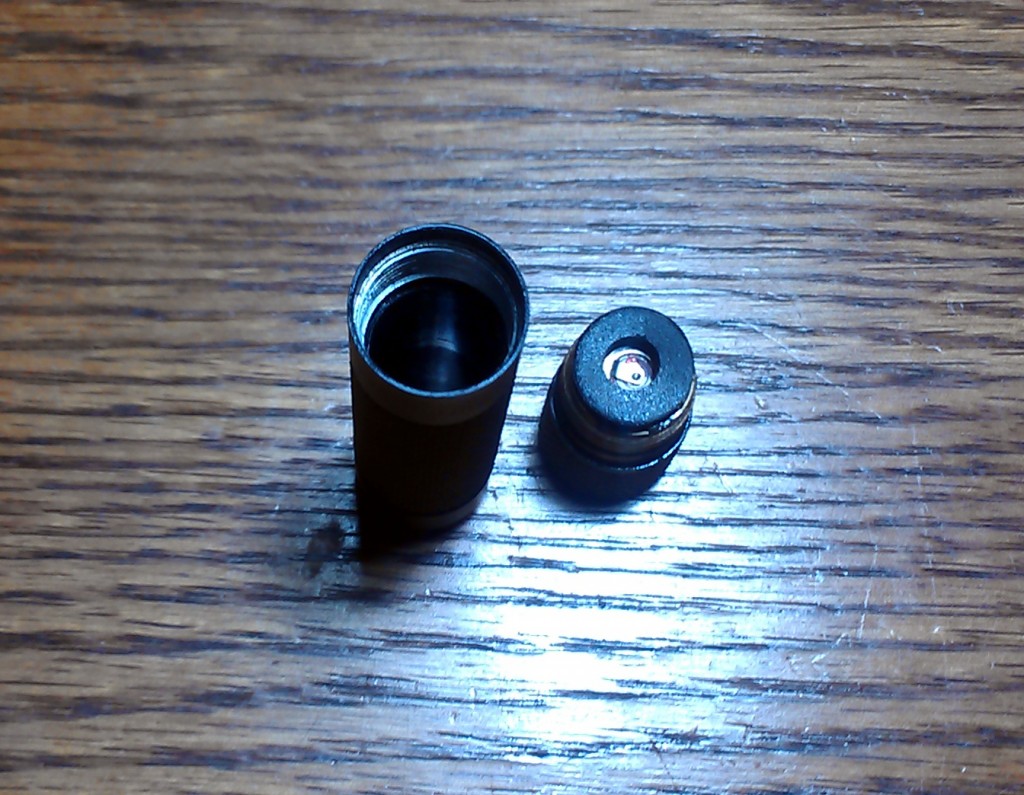 The Ti has only two modes, High (fully screwed in) and Firefly (just barely screwed in). Despite the square protrusion for the lanyard ring, it will tail stand with surprising stability. The firefly mode (0.04Lm nominal) looks very suitable for inspecting a nearby object without killing your night vision, and the high mode (60Lm nominal) is, by the standard of something marginally larger than my pinkie finger, really quite impressive. Certainly _more_ than enough to get around safely at night. The Ti also throws noticeably yellower light than the T10 – somewhere in the 3600K region if I had to guess, with a bright spot and a 75° cone pattern.

As a minor quibble, the threads on both aren’t all that tight, so if you back the head off just enough to turn off, then push down on it, both modes can be reached, which is a bit inelegant. It provides an easy means for momentary on, and it is just an issue of remembering to turn them securely off before stowing, but it is a disadvantage relative to clicky type controls in that they are easier to accidentally activate.

Lots of utility for $30, and they are damn cool in their own right. Modern LED emitters are pretty amazing.

This entry was posted in General, Objects. Bookmark the permalink.