Article note: So, I'm totally onboard that Americans' weird selectively puritanical attitudes are absurd, and having our hegemonic tech firms enforce them is not a good thing. We've been having this fight forever, go read Nabokov's afterword _On a Book Entitled Lolita_ from 1956 and its the same discussion with better language. ...But also, please don't blow smoke up my ass about intentionally overtly sexualized content being anything other than what it is. It's right there in the handle, it's a highly effective strategy to get those engagement dollars, don't be disingenuous. Let's be civil, throw a THOT tag on the things that use sex to drive engagement, and move on. I know the reason why not is ad dollars, advertisers are major perpetrators of the sexual-but-not-pornographic attention grab, if it puts them off, they're full of shit and we can not let them filter on it.
Comments
Posted in News | Leave a comment

Article note: Neat! I read some stuff about people trying DIY ECM for internal features like barrel rifling a while back, but this looks markedly more sophisticated, even though there's nothing terribly complicated or inaccessible in the setup. 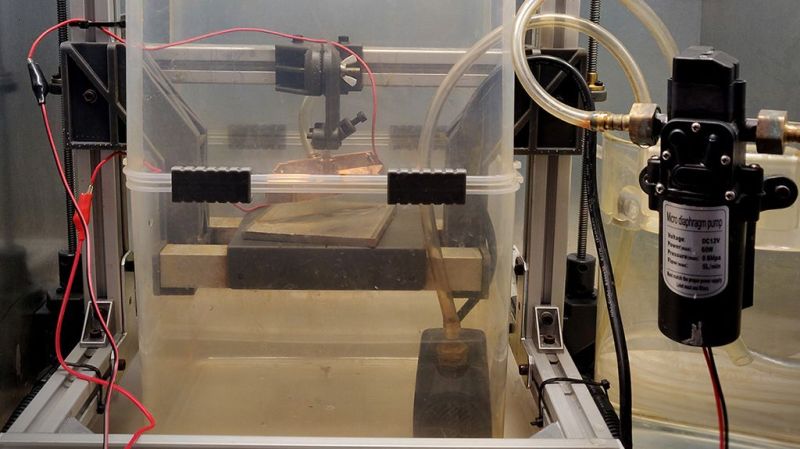 When it comes to turning a raw block of metal into a useful part, most processes are pretty dramatic. Sharp and tough tools are slammed into raw stock to remove tiny bits at a time, releasing the part trapped within. It doesn’t always have to be quite so violent though, as these experiments in electrochemical machining suggest.

Electrochemical machining, or ECM, is not to be confused with electrical discharge machining, or EDM. While similar, ECM is a much tamer process. Where EDM relies on a powerful electric arc between the tool and the work to erode material in a dielectric fluid, ECM is much more like electrolysis in reverse. In ECM, a workpiece and custom tool are placed in an electrolyte bath and wired to a power source; the workpiece is the anode while the tool is the cathode, and the flow of charged electrolyte through the tool ionizes the workpiece, slowly eroding it.

The trick — and expense — of ECM is generally in making the tooling, which can be extremely complicated. For his experiments, [Amos] took the shortcut of 3D-printing his tool — he chose [Suzanne] the Blender monkey — and then copper plating it, to make it conductive. Attached to the remains of a RepRap for Z-axis control and kitted out with tanks and pumps to keep the electrolyte flowing, the rig worked surprisingly well, leaving a recognizably simian faceprint on a block of steel.

[Amos] admits the setup is far from optimized; the loop controlling the distance between workpiece and tool isn’t closed yet, for instance. Still, for initial experiments, the results are very encouraging, and we like the idea of 3D-printing tools for this process. Given his previous success straightening his own teeth or 3D-printing glass, we expect he’ll get this fully sorted soon enough.

The Itanic Has Sunk

Article note: They held out for 20 years with it on the market, and another 10 in development before that, for a project so expensive, late, and beset with failure that people debate whether it was a conspiracy to suck the air out of competing high-end architectures, or simply Intel's third sequential utter overestimation of their own ability to produce a viable next-gen architecture (after the iAPX432 and i860/960 stuff). It'll be weird not seeing jokes about it in the tech press, it's been a constant for the entire part of my life where I've been paying attention to the tech industry.
Comments
Posted in News | Leave a comment

Amazon has ruined search and Google is in on it

Article note: It's such a bummer that the internet has been so thoroughly overrun by people trying to scam a quick buck. There is a degree of "failure of imagination by early designers," but I'm not even sure what a system robust against motivated scammers, SEO assholes, and their sock-puppets would look like, especially one that isn't extremely, dangerously invasive to its users.
Comments
Posted in News | Leave a comment

CDC mask reversal: Vaccinated should wear masks in many settings amid surge

Article note: And there it is.

Fully vaccinated Americans should go back to masking up in schools and areas of high or substantial COVID-19 transmission, the Centers for Disease Control and Prevention announced Tuesday.

The CDC says its stark reversal in mask guidance is prompted by the current surge in COVID-19 cases and the spread of the hyper-transmissible delta variant, which is now dominant in the US and thought to be more than twice as contagious as previous versions of the virus.

Article note: It's an interesting story. I'm all in on publicly attacking powerful, hypocritical abusers by whatever means are available. I'm also super opposed to the kind of commercialized surveillance that enabled it. The best case is that we get to bust this asshole and make an example of them to discourage their behavior, _and_ it makes more people cognizant of persistent commercial surveillance to get enough public opinion to reign that shit in.

Monsignor Jeffrey Burrill was general secretary of the US Conference of Catholic Bishops (USCCB), effectively the highest-ranking priest in the US who is not a bishop, before records of Grindr usage obtained from data brokers was correlated with his apartment, place of work, vacation home, family members’ addresses, and more.

The data that resulted in Burrill’s ouster was reportedly obtained through legal means. Mobile carriers sold­ — and still sell — ­location data to brokers who aggregate it and sell it to a range of buyers, including advertisers, law enforcement, roadside services, and even bounty hunters. Carriers were caught in 2018 selling real-time location data to brokers, drawing the ire of Congress. But after carriers issued public mea culpas and promises to reform the practice, investigations have revealed that phone location data is still popping up in places it shouldn’t. This year, T-Mobile even broadened its offerings, selling customers’ web and app usage data to third parties unless people opt out.

The publication that revealed Burrill’s private app usage, The Pillar, a newsletter covering the Catholic Church, did not say exactly where or how it obtained Burrill’s data. But it did say how it de-anonymized aggregated data to correlate Grindr app usage with a device that appears to be Burrill’s phone.

The Pillar says it obtained 24 months’ worth of “commercially available records of app signal data” covering portions of 2018, 2019, and 2020, which included records of Grindr usage and locations where the app was used. The publication zeroed in on addresses where Burrill was known to frequent and singled out a device identifier that appeared at those locations. Key locations included Burrill’s office at the USCCB, his USCCB-owned residence, and USCCB meetings and events in other cities where he was in attendance. The analysis also looked at other locations farther afield, including his family lake house, his family members’ residences, and an apartment in his Wisconsin hometown where he reportedly has lived.

Location data is not anonymous. It cannot be made anonymous. I hope stories like these will teach people that.

Article note: Welp, we're gonna have masks again in the fall because people can't get their shit together.

The rolling seven-day average of new COVID-19 cases in Lexington has jumped to 71 after being as low as seven on July 1, according to the Lexington-Fayette County Health Department. … Click to Continue »

Article note: Reader was amazing because it allowed "unsophisticated users" to do their own curation and aggregation, which provided the network effect to keep the RSS ecosystem healthy. Technical users can still get that experience (I consume most of my internet through TT-RSS), but I'm still convinced Reader had to go because it represented a threat to the manipulate and monetize algorithmic curation business model. 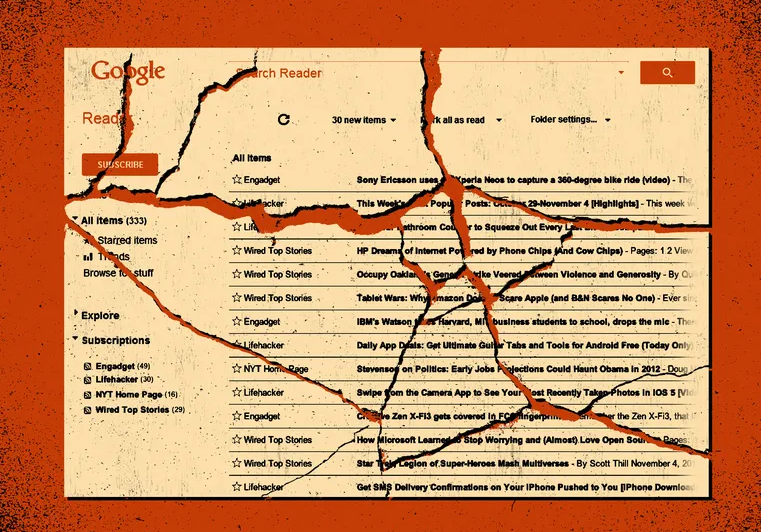 The Ringer writes about a when being online was a thrilling mix of discovery, collaboration, creativity, and chaotic potential. Then Google Reader disappeared.

Google Reader was a slim workhorse of a site launched in 2005 that uses pre-existing RSS feed protocols to turn the chaos of the web into a pleasant lazy river of content. Google Reader is not the world’s first RSS newsreader, nor will it be the last, and over the years plenty of internet power-users will sniff that it’s not even the best. But it’s the one that caught on.

“I don’t know about you, but I think Google Reader is among the best and most important pieces of technology in my life,” a health care blogger whom I followed via Google Reader wrote in October 2011. “I’d give up my microwave way before my Reader.” The offering certainly was, over the course of its 2005 to 2013 existence, an ideal showcase for some of the web’s prevailing strengths at the time—one of which was the emergence of the blogosphere, that backbone of what the Good Internet could be.

And when Google Reader disappeared in 2013, it wasn’t just a tale of dwindling user numbers or of what one engineer later described as a rotted codebase. It was a sign of the crumbling of the very foundation upon which it had been built: the era of the Good Internet.

Read more in the article here

my friends: you need to let it go and move on with your life

Article note: mmyep. It takes surprisingly little bureaucratic friction to render something unusable to most people, and it especially excludes people who are under time pressure, sick, less-literate, not culturally acclimated to browbeating bureaucrats in the American style... you know, the vulnerable.
Comments
Posted in News | Leave a comment