A quick review of my observations from SC10.

The two takeaway messages from the show floor this year:
1. “We’ve all bought these damn GPUs, now how do we make them work?”
2. “Everyone should want the shiny flash storage devices, even though their capacity, price, and especially lifespan are still kind of dubious.”

As for my experience, I had some excellent discussions with people from The Portland Group, AMD, ARM, and various universities, and the always interesting opportunity to meet many of the advisor’s former gradstudents. We also had the yearly Burton Smith update, which provided excellent food for thought, as you might expect from anyone who is in the “Microsoft Fellow, paid to do whatever they feel like as long as Microsoft gets dibs on the results” phase of life.

The aggregate.org/University of Kentucky booth was pretty successful, with the usual handmade look, with the lighted sign tower/print on demand system as last year, a new hexagonal structure with three large rear projection screens, and the MOG Maze. We were kind of worried about being next to nVidia on the show floor, but it turned out to be a good thing, in that it attracted lots of the right kind of people to be interested in our research, and allowed us to hear the 5 minutes of technical content from each of their 30-minute talks.

I should also mention that we learned that Under NO CIRCUMSTANCES should anyone, ever ship with YRC, who managed to not only damage our packed booth, starting with damage to the pallet before it even left Lexington, but delivered it on a different, crappier pallet than it left on.

We were also given a hacked router set up for MIT’s RoofNet mesh system, which we ran in our booth during the show as part of an experiment Kurt Keville was running to test Roofnet under congested conditions (10,000 geeks VS Wifi Network is a special opportunity), which is pretty cool and I hope to get to play with later.

One of the most impressive displays on the floor was Hardcore Computer’s incredibly well polished liquid immersion cooling systems. A base price of $5k for a desktop system like that is not even unreasonable.

And now for the fun stuff, mostly to shout out vendors who gave me good crap:
Best Party: The Exhibitor Reception, which, among other things, had excellent duck etouffee and a great hosting venue.
Runner up party: The FusionIO afterparty, which, while not very well attended, was directly across the street from the conference center, and had free food, free booze, and pushed the limits of good taste… 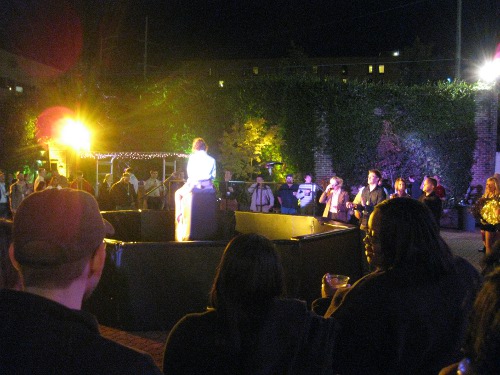 (FusionIO Employee. “Mounting” a hard drive motif mechanical bull. In a skirt. Saints cheerleaders in the background.) They also had a reasonably neat shirt (top right below).
And from the swag: 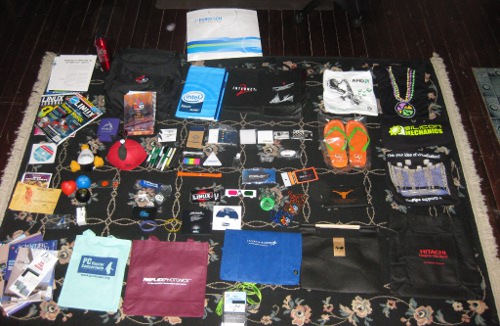 Best Bag: The Conference bag. It isn’t terribly well made, but it is a neat layout.
Best Shirt: Silicon Mechanics wins again. I wear their shirt from last year all the time, its just a great design.
Best Pin: Teradactyl’s little pewter-finish pterodactyl pins. They also get points because the advisor won a pterodactyl-shaped RC plane in a drawing.
Best Toy: Penguin Computing’s standard stuffed Tux, which has now joined the rookery on the back of my printer.
Best Pun: The TeraGrid PetaFlops flip-flop sandals.
Best Office Supply: Sandia National Lab’s little tape-flag/postit selection folders.

LinuxJournal and LinuxMagizine both gave out sample issues, and I may end up subscribing to one or the other, I haven’t had a paper user-centered computing magazine since I lost interest in Macs and dropped my MacAddict subscription in 2002 or so.

A couple vendors were giving out copies of their tools on CD, the most interesting to me was copies of the Open64 toolchain from AMD, which I’ve heard about but never had the opportunity to play with.

Overall, it wasn’t quite as awe-inspiring for me as last year, but I suspect that has as much to do with having seen it before as any difference in the show. There was certainly a lot of good personal networking going on both indivdually and for the research group, and there really is nothing else quite like Supercomputing, the mixture of research and industry creates an incredible intense experience, which is, as far as I know, completely unique.

This entry was posted in Computers, Entertainment, General, OldBlog, School. Bookmark the permalink.